***Warning, the following may contain spoilers for Nekomonogatari Kuro and all previous entries in the Monogatari series. Reader discretion is advised.*** 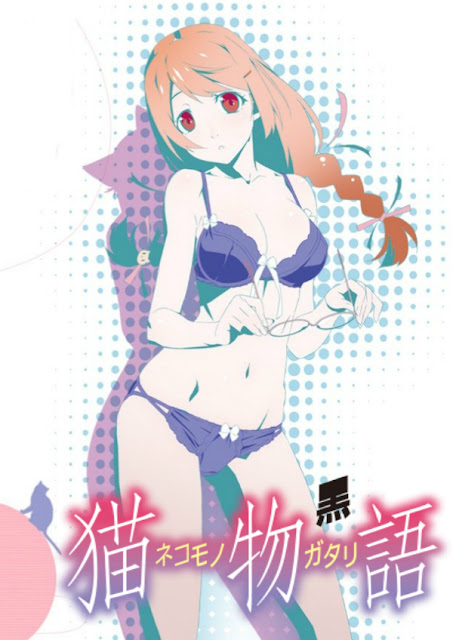 Our story takes place before the events of Bakemonogatari.

On the first day of Golden Week and Koyomi Araragi (voiced by Hiroshi Kamiya) gets a surprise wake-up call from his youngest sister Tsukihi (voiced by Yuka Iguchi). He takes the opportunity to ask his sister how he would know if he has fallen in love.

Koyomi heads off and runs into the girl he was concerned over, Tsubasa Hanekawa (voiced by Yui Horie). Although Tsubasa is wearing her usual smile, her left cheek is bandaged. Koyomi becomes infuriated when she confesses that her foster father had hit her. Wanting to keep the incident a secret, Tsubasa offers to grant one request. Koyomi says he'll stay silent if she allows him to heal her with his vampire blood.

After the meeting, Koyomi decides to visit Meme Oshino (voiced by Takahiro Sakurai). He tells his mentor of the encounter with Tsubasa and how the two buried a tailless white cat struck by a car. Meme informs Koyomi that they had actually come across an oddity known as a Sawari Neko (Cursed Cat).

On his way home, Koyomi again runs into Tsubasa. Yet there's something frightening about the meeting. Tsubasa, possessed by the oddity, is carrying the unconscious bodies of her foster parents. In an attempt to stop her, Koyomi gets injured by the cat. He wakes up several hours later back at Meme’s. To his horror, Koyomi learns that Tsubasa may be beyond saving.

Though a prequel, this series could only have worked after the release of Nisemonogatari. This is neither good nor bad, it’s just an observation.

I go into each installment of the Monogatari series hoping to relive the epicness of the original. I'm thrilled that Nekomonogatari is closest to matching that benchmark. This was such a good anime. While failing to reach the original's level, it corrected many of the problems of its predecessor.

I'm more excited than ever to watch Monogatari Series Second Season. Despite that being such a disappointing title.

One of the hallmarks of Monogatari is the dialogue-driven narrative. None of the entries have failed to deliver on this aspect. But Nekomonogatari was unlike the ones before it. Nekomonogatari has some of the best dialogue to come out of the series thus far. It's smart, funny, and poetic. Plus the show wasn’t afraid to be raunchy, immature, and silly. The best thing was while the dialogue remained fast paced, it slowed down. This allowed the viewer to follow along better.

I didn’t mention it during my Bakemonogatari review, but the same thing applies here. Meme Oshino is the kind of character who is perfect for deep and engaging dialogue. 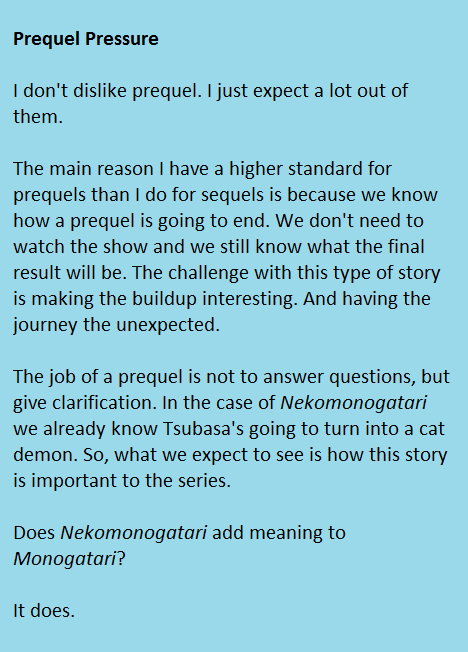 Meme is what I would call a guide character. He doesn't know everything, but he knows way more than we could ever hope to know in these kinds of situations. He may not have the right answers, but even if he did he's not going to say what they are. Instead, he led others so they could discover the best course of action on their own. Whenever he did this with Koyomi, it produced some of the best scenes in the entire show.

The Visuals: A Return to Form

If the visuals were anything less than breathtaking, then it wouldn’t be Monogatari. Luckily for us, Nekomonogatari delivered the same level of quality in Bakemonogatari.

If you remember, Nisemonogatari’s visuals came off as gimmicky. What I was trying to get across was that the art style never felt part of the story. It was only the way it was because Bakemonogatari was so stylized. 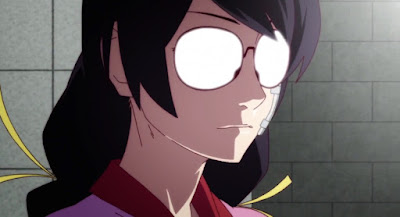 Nekomonogatari understood Bakemonogatari's style wasn't a byproduct of the story. It was the driving force behind it. Scenes looked how they looked because that was the only way this story could've been told. Looking cool isn’t enough if there's no meaning behind it.

For the remaining entries, here’s hoping this concept is never forgotten again. 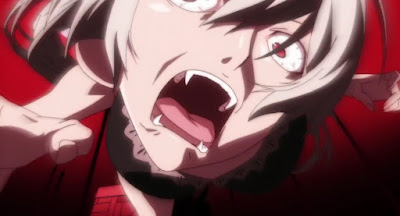 Though an improvement on Nisemonogatari, Nekomonogatari still manages to make its own mistakes.

Remember back when we first met Tsubasa in Bakemonogatari? She left a significant impact and by the end of Nisemonogatari, you knew she still had a large role to play. So when I learned this show was going to focus on her, I got excited.

After the final episode, I sat back and reflected on how much I enjoyed what I just saw. Then it hit me. Not once did I see Tsubasa. Sure there was a person who looked and sounded just like her, but Tsubasa was not in this show.

I couldn’t care less about the Tsubasa that was in Nekomonogatari. This is terrible because this shouldn't be the case. Never once did the show make me want to feel sorry for her, cheer for her, or feel anything for her. Just compare this series with the final arc of Bakemonogatari.

This show covered the first time Tsubasa transformed into the cat demon, but this was not the first time we’ve seen it. When it happens in Bakemonogatari, there was so much to it. It was sadder, more depressing, and more tragic. So how’s it possible that it didn’t happen again?

I think I have an answer.

By the end of Bakemonogatari, we had a whole series to get to know Tsubasa. Thus, when she was in trouble, it was significant. Tsubasa was an important character to the story. That's a quality that's hard to illustrate in four episodes. Nekomonogatari tried anyway.

If you’re going to take the time to tell this segment, take the full time needed to tell it to us. Yes, I do like the show. But I can't say I'm happy with what Nekomonogatari did to Tsubasa’s character. I don't imagine this caring over into Monogatari Series Second Season, but we’ll see. 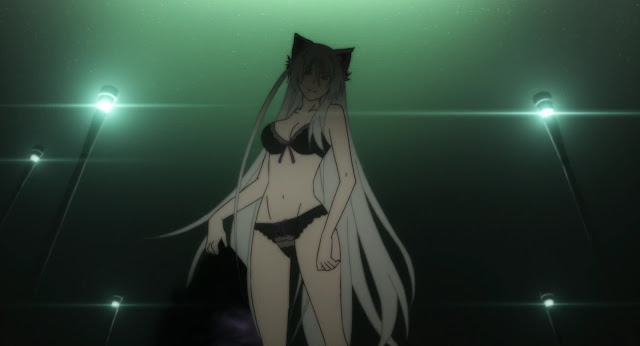 I'm nowhere near tired of this series. There's still so much more that needs telling.

I believe this show was to promote the upcoming Monogatari Series Second Season. Yet, it's clear that effort went into Nekomonogatari. It gives me confidence that Bakemonogatari wasn't just a fluke and that the magic can repeat.

The dialogue was superb and the visuals were just as outstanding as ever. Plus there are only four episodes in this show. So there isn’t a reason why you shouldn’t watch it, especially if you’re a fan of the series.

Awe, who am I kidding? If you're a fan, you’ve already seen it.

Others in the Monogatari Series

Posted by LofZOdyssey at 7:16 AM