***Warning, the following may contain spoilers for No.6. Reader discretion is advised.*** 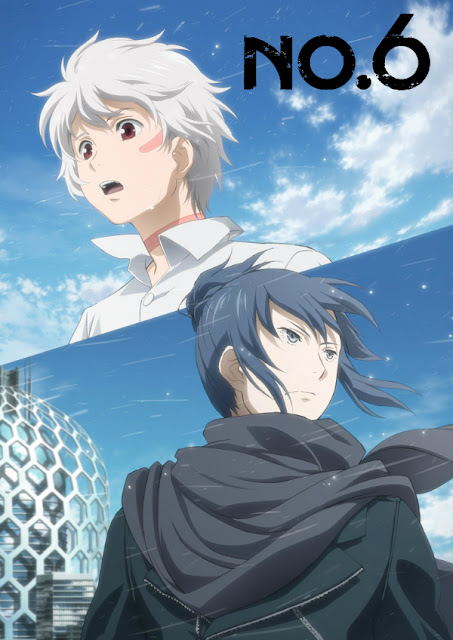 Following a devastating war, most of the Earth has become a wasteland. The remnants of humanity live in the few remaining habitual zones. One of these is the super city known as No.6.

A perfect utopia, No.6 strives to preserve and cultivate the best of civilization. Here, no one knows hunger. No one knows fear. No one is ever unhappy. Everything is as it should be. Those who think otherwise don’t stay around long.

Shion (voiced by Yuki Kaji) is a resident of No.6. What he knows of the world exists only within the walls of the city. Perhaps a little antsy, Shion’s life would otherwise be uneventful. This changes the day he meets Nezumi (voiced by Yoshimasa Hosoya).

For the first time, Shion begins to suspect something isn't right about No.6. Just thinking that, though, is enough to destroy everything. The authorities pursue Shion and plan to take him away. With Nezumi’s help, he manages to escape over the walls.

Shocked to see the disparity within the real world, Shion decides he must learn the truth. He hopes doing so will save everyone from the clutches of No.6. However, Shion fails to understand how dark the truth may turn out to be.

I didn’t have any idea what No.6 was about. I knew nothing of the story. Nothing of the premise. I didn’t even know what genre this series was. There were zero expectations since I had nothing to expect. I can’t remember the last time I went into a show this blind.

So, coming from the cleanest of slates, how was No.6? Well, it wasn’t great. Nor was it alright. From beginning to end, this series was a mess.

No.6 had a lingering “Why” problem. When anything happened, why? Whenever a character said anything, why? Whenever the story took any twist or turn, why? All I could ask was “Why?” This series never explained itself.

I’ll give the show this, though, a byproduct of not setting anything up meant little exposition. No.6 never spoon fed what was going on. Through the visuals and situations, we could piece together the world. Granted, if you’ve experienced any dystopian story ever it makes it easier. 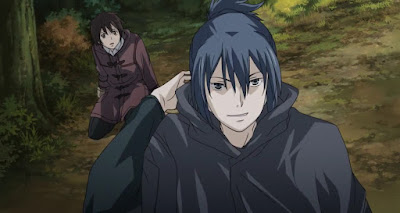 A vague, world ending war. Most of the planet has become uninhabitable. Society exists under a tight, Big Brother-esque controlling government. Those who stay in line are always watched. Those who speak up disappear. A perfect utopia which has been built atop acts of unspeakable horrors. 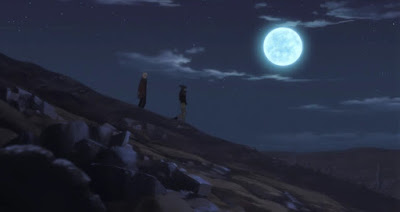 Rather straightforward stuff. Good on No.6 for not detailing these things we’ve seen hundreds of times. With that out of the way, this was a chance to do something new. A chance that wasn’t taken. I don’t know how this universe was special.

I suppose there could’ve been an explanation. Too bad if it existed, it needed to fight through an overwhelming heap of confusion. Mixed with a hearty helping of boredom. And do you know what makes it worse? There was a good story here. Not the main one. No, it was a plot line that never saw an opportunity to grow. 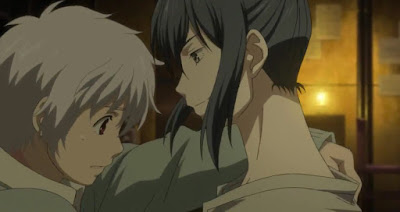 Involving Shion’s friend Safu (voiced by Kiyono Yasuno) let me set the stage. Her whole life, Safu believed No.6 to be the pinnacle of society. A feeling shared by everyone within the city’s limits. Constant surveillance, identification, and oaths of loyalty were everyday things to her. The very thought of anything different was ludicrous. 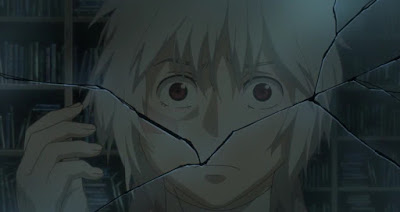 Then Safu got an opportunity to study within another city. Which, quick side tangent, makes no sense. Why would No.6 allow its citizens to leave? By doing so, you’re giving people the chance to realize something isn’t right. Did that mean anyone who came back got taken away the moment they stepped off the plane? A bit roundabout since the city did that anyway for almost any reason.

Any who, back on point.

Safu saw people expressing themselves. People could give opinions, even contradictory ones. Everyone was more open to new ideas and ways of thinking. It was strange but in a liberating way.

A few months passed, Safu learned of her grandmother's passing. When she got back to No.6 the differences were blatant. For the first time, what authorities were saying and the reality weren't the same. Almost as if they were hiding something. Thus, Safu experienced an emotion she had never experienced before. Doubt.

Focus on that. Make Safu the main character and ignore everything else this show did. Boom, there’s your No.6.

While you’re at it, don’t have Safu get captured. Don’t let her be useless for the majority of the show. Don’t follow two whiny pricks around arguing about who knows what. Don’t let everything become a rescue mission. Don’t have one the whiny prick’s mom involved in everything despite not adding anything. You can keep her as the best character though. And don’t let your most interesting idea get turned into a convoluted story about God like beings.

That would be stupid if you did any of that.

I would now like to mention I haven't read any of the original novels. As far as I know, those are well written and amazing works of modern Japanese literature. I imagine any and all themes tackled within them are poignant and thought-provoking. Which, if true, makes this anime a horrid adaptation.

Or if the shows spot on, that means they both suck. 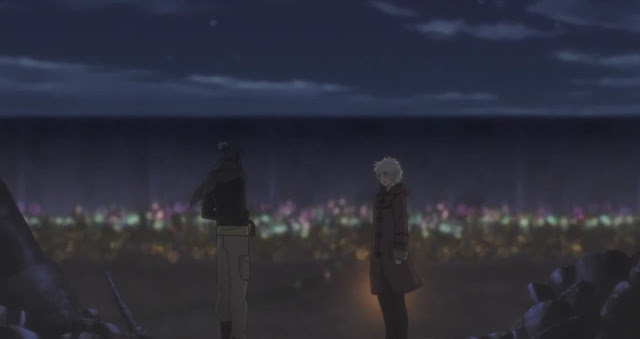 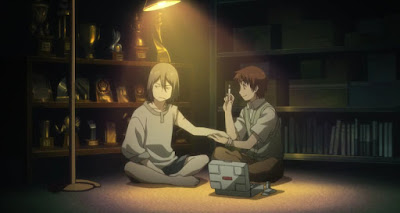 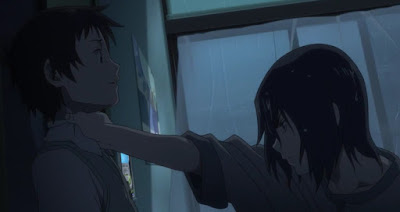 What I’m about to say should’ve been in the positives section.

The art work of No.6 wasn’t bad. On several occasions, the visuals created a powerful atmosphere. This series was quite stylized. It was enough to make you think what you were seeing was important. And that’s why I'm mentioning this in the negatives section.

The animation of No.6 was only a beautiful veil over a hollowed-out shell. Everything looked deep and thoughtful. But when you start trying to piece it together, you realize none of it means anything. 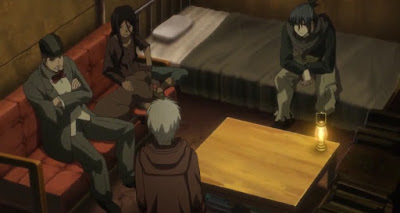 For example, Shion got in trouble for helping Nezumi. The punishment was made to sound severe. Shion and his mother had to leave their luxurious home. They had lost their elite status.

According to the story, this was something that wasn’t good. Did it mean a harder life? Did they live in poverty? Let me ask you something. Does a steady source of income in a quaint little house in the suburbs in an area free of crime sound bad to you? If yes, then this was hell on Earth for Shion. 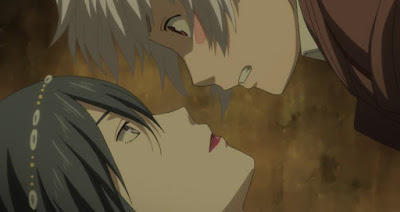 And considering what Shion did was beyond dumb, he got off lucky. Harboring a fugitive in a totalitarian state like No.6 should’ve gotten him and his mother killed. Instead, a downgrade to upper middle class. 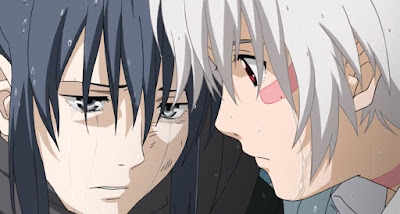 Backing up a bit, why did Shion think aiding Nezumi was a good idea? I can’t buy into the “out of the goodness of his heart” argument. What Shion did was the type of kindness that’ll get somebody stabbed. What would you do in this situation? 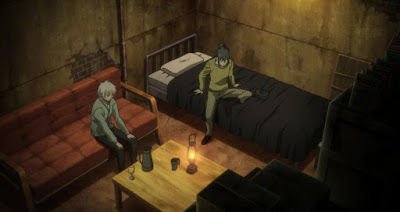 There’s a typhoon outside. It’s dark. Your window is wide open for some reason. You’re minding your own business. You turn around and someone you don’t know is standing on your balcony. They're disheveled. They're hurt. Before you have the chance to say anything, their hands are around your throat. Do you, with love and affection, offer this person food, clothes, and a place to rest? 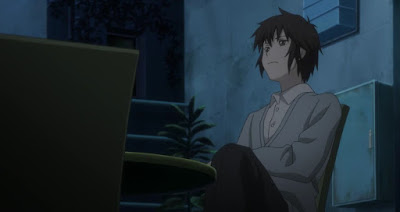 That “place to rest” part is important. This person isn’t lying down while still maintaining full control of the situation. This person passes out in your bed. While they’re unconscious, do you choose to not tell the authorities? Keep in mind, you know this person is on the run. You know people are looking for him. You know the people looking for him can track him. And, you also decide to ignore a mandatory security check.

By the way. If you think I’m spoiling anything, I’m not. This all happened in the first episode. It was only the beginning of a long line of poor, unthought out decisions. 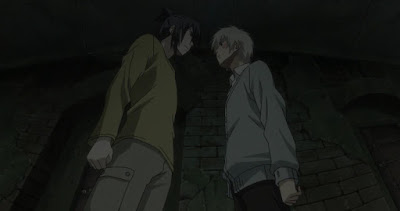 That’s about as much of the story I can stomach talking about. To unravel what might have taken place is a headache I don’t want to deal with. And I don’t need to do that anyway. Everything turned out okay in the end. For No.6 had the penultimate answer to a plot suffocating under its own weight. Magic.

To make it even better, this wasn’t the worst thing about No.6. 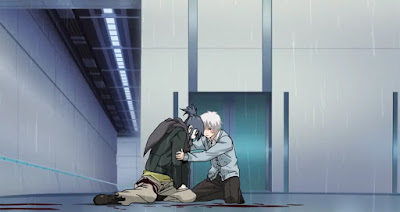 Shion was insufferable in his idealism. Learning your whole world is actually a cruel and sadistic prison is a lot to take in. I’ll let him have that. Yet was it so hard to believe some people might just be pricks? Sometimes it's okay to look out for yourself. Particularly when others are blatant in their wiliness to hurt you. That or be the most over-reactional character I’ve ever seen. 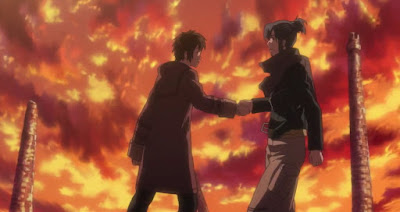 There was a scene where Shion and Nezumi were meeting an informant. Nezumi was doing all the talking since this was his world. He and the informant weren’t on good terms. Each had their fair share of snarky comments for the other. Yet their banter wasn’t that aggressive. Didn’t matter though. The informant still…insulted Nezumi?

I phrase that as a question because I don’t think any insult was given. But Shion sure thought it happened. He lost mind and proceeded to beat the crap out of the informant. Why did he do that? Don’t ask me. This was the only instance of Shion freaking out. Yet to make it more confusing, Nezumi said much nastier things to others without Shion batting an eye.

Also, Shion might have been a secret super soldier. There's enough evidence to support that suspicion.

Nezumi was better, but not by much. His biggest problem was his cynicism. He chose to be a jerk when there was no need to be one. Like the time he lashed out at Shion because Shion wasn’t doing what Nezumi thought was best. Except Shion wasn’t getting in Nezumi's way.

Plus, Nezumi secretive for no reason. He didn’t want to say why he hated No.6. That was weird since Nezumi wanted Shion to hate No.6? He even said they would become enemies if Shion chose to protect the city after learning the truth. Wouldn’t the quickest, most effective way of getting Shion on your side be telling him what happened?

I said it in the beginning. No.6 had a “Why” problem. Shion and Nezumi were the largest contributors to that problem. 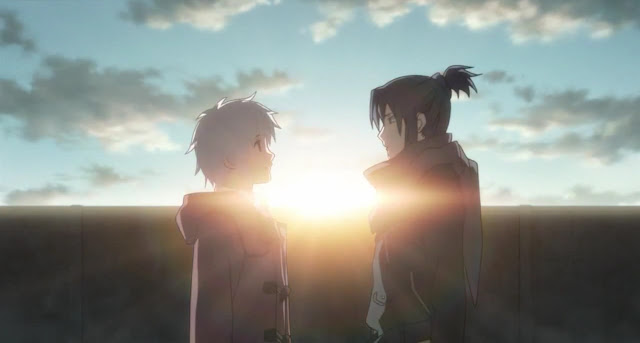 The most telling thing about this series came during the climax. It has to do with the feeling I felt during the highest point of the story. You know, when emotions should be at their most intense.

I had an overwhelming feeling of nothing. I didn't feel a damn thing.

No.6 wasn’t worth my time. It’s not worth your time. This is a series you can skip.