***Warning, the following may contain spoilers for Love Lab. Reader discretion is advised.*** 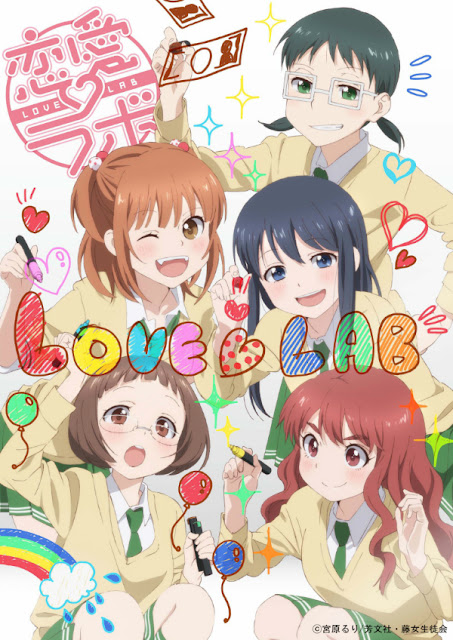 The young ladies at Fujisaki Girls Academy have a reputation of being prim and proper. Something the more boyish Riko Kurahashi (voiced by Manami Numakura) finds boring. And nowhere does this standard shine brighter than with student council president Natsuo Maki (voiced by Chinatsu Akasaki).

One day, Riko discovers Natsuo’s little secret. A secret that could soil her reputation. There’s nothing in world Natsuo wants more than to be in a relationship. And the president has spent an unhealthy amount of time researching the subject.

Due to Riko’s own stubbornness, she ends up assisting Natsuo in this endeavor. Riko claims to be an expert on love and touts a long history of romantic experience. Even though Riko has as much knowledge on getting a boyfriend as Natsuo does. As in none.

Though Riko and Natsuo try to keep their project a secret, more people keep getting dragged on board. This includes the student council secretary, Suzune Tanahashi (voiced by Inori Minase). The former student council president, now vice-president, Yuiko Enomoto (voiced by Ayane Sakura). And the council’s treasurer, Sayori Mizushima (voiced by Yo Taichi).

Soon, Fujisaki’s student council begins accepting requests to advise other students on their relationship troubles. While they may be flying blind, this group is committed to seeing love blossom for all those who seek their help.

I didn’t think Love Lab would be anything special. From the outset, it looked like the countless other slice-of-life, high school anime I’ve seen. Which wasn’t a problem. These are often some of the easier series to sit through. Yet there’s kind of a lot of these types of shows. They can still be good. And there are plenty that are. But, it’s hard to expect anything different at this point.

So, when something does come along and does anything different, it’s refreshing. That was what Love Lab was, refreshing.

Don’t get me wrong. This series didn’t redefine the genre. Nor did it stumble on the next big thing. What it did do, though, was illustrate these types of shows don’t need to follow a formula. They can add a bit of personality. There aren’t steps that need following. There can be detours. Other things can happen. 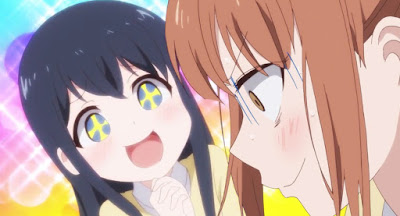 Girls trying to figure out what boys like isn’t new. It can be the focus of a series. Or it can play a major element in one. Regardless of which, there tends to be one thing in common. The cast is always trying to figure it out rather than trying it out. On occasion, guys have little to do with the actual show. Sometimes there not even a single dude in a show. 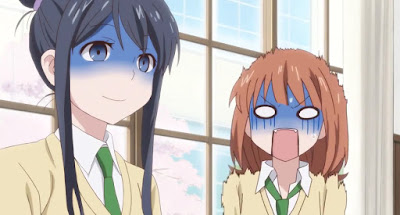 Love Lab not only had the whole love research thing, there were chances for the girls to use what they practiced. Most of the student council had routes open for them. Some were more explored than others. But at least they were there.

Also, researching love wasn’t the only thing these girls did. Though it was the main thing, there were other problems which needed solving. Problems which weren’t contained to a single episode. Instead of having thirteen separate stories, there was one long narrative.

Love Lab had a sense of progression. It wasn’t only a show with random scenarios. When things happened in this series, they happened for a reason. When someone did something, there were consequences. Events flowed into each other. From beginning to end, there was a path.

Color me impressed. I didn’t expect Love Lab to do this. By the end, I found myself thinking, “Where is this leading? Where is that going to go?” I don’t remember the last time this type of show had me doing that.

Is this one of the best high school anime I’ve seen? Let’s not get carried away. Though I will give it this. If I see some of these elements in future shows, I won’t say, “This reminds me of all the others.” Rather it’ll be, “Hey, this reminds me of Love Lab.”

Pretty good when you consider how saturated the field has become. And this wasn’t even the best part of the show. 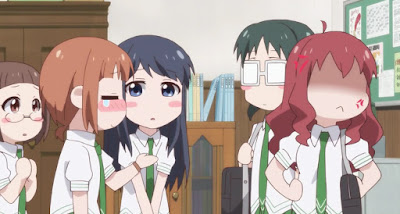 If you were to ask me what the best student council in anime is, I would always respond the same. Osai Academy’s student council from Seitokai Yakuindomo, naturally. Love Lab’s, though, wouldn’t be low on the list.

This was a great cast of characters. One I, again, didn’t think this show was going to give. 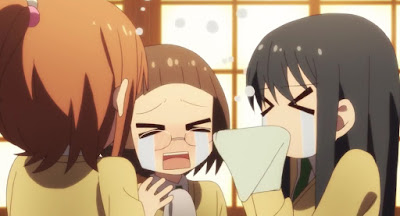 This group didn’t rely on wackiness. They were fun throughout. We got the over the top personalities you’d expect. Yet this show also took the time to explore some of their insecurities as well. We got to know this group. 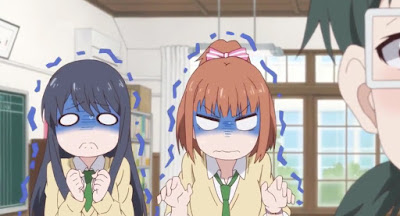 Riko and Natsuo were a fantastic pair. I loved how these two were the most popular in their school and neither were aware of it. Natsuo knew she had a reputation as a role model and took pride in maintaining that. But like Riko, she didn’t know how far that admiration went. They both figured it out, which was pretty fun scene. While this was nice, this wasn’t what made me like them. 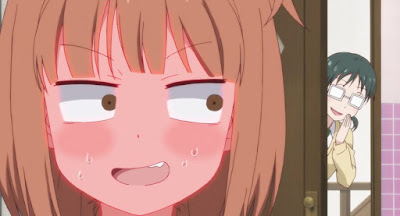 They worked well off each other. Riko was the straight man. Yet Natsuo took up the role every now and then. They balanced each other.

This was a strong combination of academic and street smarts. Natsuo was dependable, kind, and studious. As well as naïve and innocent. Riko was adaptable, tough, and new how to talk to people. But she was also lazy and had trouble doing the bare minimum amount of work. 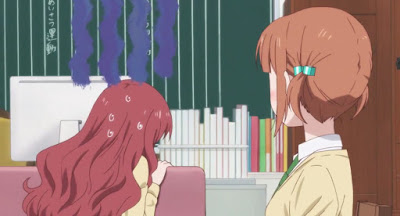 What they both had in common was their tendency to take on challenges by themselves. Riko and Natsuo didn’t want to burden others. Except both wanted others to rely on them. This was a lesson they learned and taught each other.

Over the course of the series, you could see how close their friendship was becoming. To the point where their insecurities felt more real. Riko was a perfect example of this.

We’ve all been there. We’ve waited for the absolute perfect moment. Yet got screwed over because it never came.

These extra details made the ending more meaningful. It wasn’t just a good-bye-thanks-for-watching episode. It was the result of something that got built up.

That was only the two leads. The other members of the council were a lot of fun as well.

I don’t have a whole lot to say about Suzune other than she was adorable. That and she was the wild card. Odd since she was quite timid. She was a good addition to the sort of duality this series had going on. When she needed to, Suzune could tip the scales in whatever direction the show required.

Yuiko played into this duality. She was like Natsuo in aloofness. They both had their own outlooks which they felt were right. They were often very snarky toward each other. No matter how small an advantage was, they had no problem gloating over their rival. The level of pettiness they reach was wonderful.

And then there was Sayori. My favorite character. Like Yuiko, Sayori shared a role. This time it was with Riko. Love Lab had two straight men. Except Sayori was much more of a jerk about it. Which was brilliant. No matter the situation, Sayori would say something to make it worse.

From the beginning, Sayori saw right through Riko’s BS. Instead of calling Riko out on it, Sayori found it much more amusing to throw jabs at her. Which was funny on its own. But sometimes it backfired. Sayori wasn’t untouchable. She could get caught off guard. And by the end of the show, her friends learned how to do that a lot more.

This group was what gave Love Lab its charm. They were what made these extra avenues worth exploring. They made them worth seeing through to the end. And they are what makes this show worth watching. 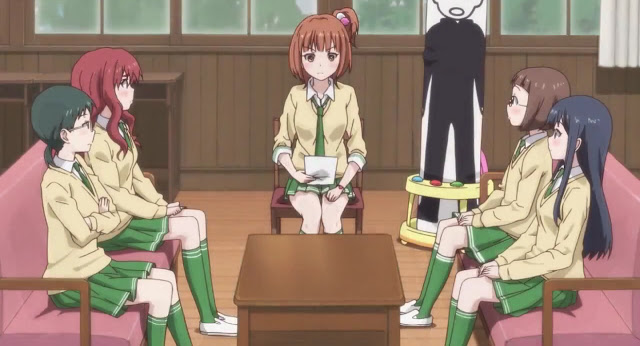 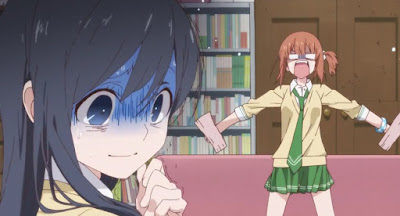 I have to mention this because of how out of nowhere and awkward it was. For only a brief scene, there was blackface in this series. I’m just going to let this one sit here and move on. 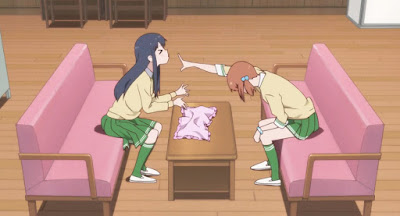 The moment Riko lied about being a love expert, you know exactly where it’s leading. Though the actual moment was well done, it wasn’t a shock. Nor was there any tension behind it. This series did some unexpected things. But it wasn’t going to make a shift like that. 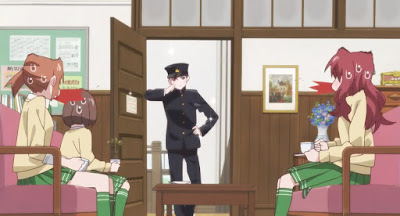 This wasn’t a huge issue. Except I don’t like making perfect predictions like this. Unless a show is awful. Then it’s pretty funny. Yet when a show’s good, like Love Lab, then it’s no fun.

Now what I’m about to say will sound like backtracking. And it’s going to come off like I’m contradicting myself. But there's not much  I can do about it. 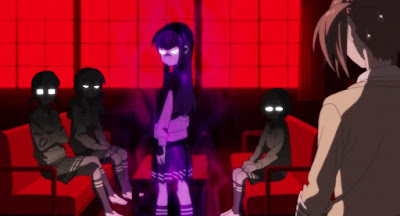 I like how this series had other things to do. Love research wasn’t the sole focus. There were a lot of side plots.

A lot of side plots. And they all showed up at the same time. Love Lab did not organize these well. 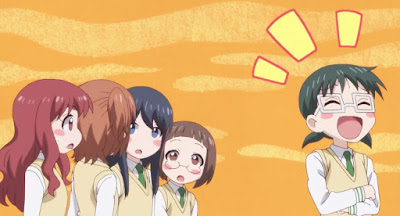 At one point, there were like five or six stories going on. There was the love research. The student council trying to give love advice. The newspaper club was starting to become a headache. Natsuo was trying to use what she studied to interact with guys. An old friend of Riko’s showed up. A person who she rejected, but she couldn't remember why. Yeah, that was a bit to handle.

None of them were bad ideas either. And that was kind of the problem. These were interesting and required a fair amount of time to explore. Love Lab decided to try and do them all at once.

If a series takes that route, it risks running into what Love Lab ran into. Sooner or later, a show will have to focus on something to give it a resolution. All other stories will need to be put on hold. And with the more stories there are, a few of them will be waiting awhile to get their ending. That or they'll get rushed and not have satisfying enough end.

Love Lab did both.

Frustrating yes. Infuriating no. While some side plots had a lackluster finish, others got the full treatment. And in the case of Love Lab, that meant they were good.

One more thing because I’m curious. How many of you are still hung up on the whole blackface thing? If you are one of those people, yeah awkward, isn’t it? 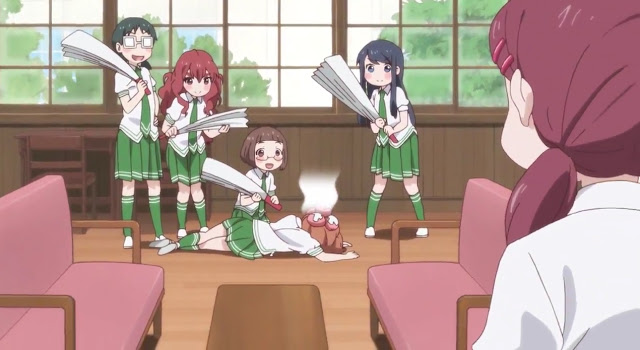 Love Lab impressed me. It did a lot of things I wasn’t expecting. And I mean that in the best way.

Here was a rare slice-of-life, high school anime that left high school. I don’t mean just going to the beach or to the mall. Plenty of series do this. Here was a show that tried to use what it was doing. Instead of only talking about it.

Then when you add in some great characters and actual progression, there’s a lot to like. Emphasis on the “a lot” part. This series does try to do many things. In the long run, something should’ve got cut. It’s hard to say what that thing should’ve been, but it needed to happen.

But even when Love Lab was at its worst, it was still pretty good.