***Warning, the following may contain spoilers for Nagasarete Airantou. Reader discretion is advised.*** 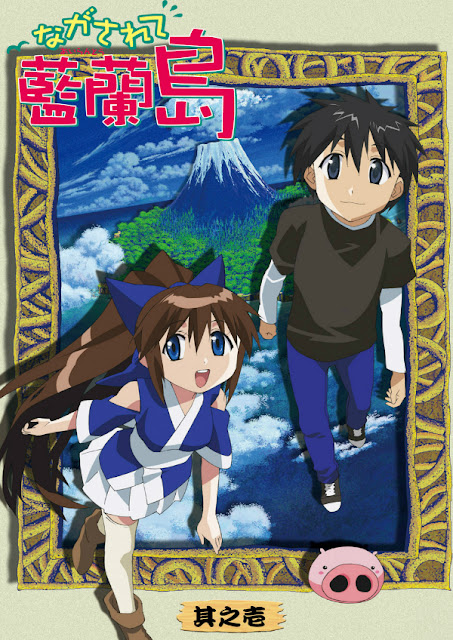 Rebelling against his father, Ikuto Tohoin (voiced by Hiro Shimono) has run away from home. While out at sea, though, the ship he’s on gets caught in a massive storm and Ikuto’s thrown overboard. Everything seemed hopeless when something miraculous happened.

Ikuto washes ashore onto an uncharted island. There he’s saved by a girl named Suzu (voiced by Yui Horie). Suzu takes Ikuto back to her village where he is an instant celebrity. To his great shock, Ikuto learns he is the only male on the island.

Quickly becoming the target of everyone’s affection, Ikuto tries to return home. Unfortunately, the entire island is surrounded by inescapable whirlpools. And with no modern technology to contact the outside world, there doesn’t seem any way off. Thus, Ikuto concedes defeat and starts to make a life as the newest resident.

Yet, as the days turn weeks and weeks into months, it’s not that bad of a fate. Life on this small island does have its fair share of challenges. But it’s a peaceful life nonetheless. And with Suzu and the other inhabitant's help, nothing is impossible for this castaway.

I was looking forward to this one. The re-watch was a formality. As well as for my own enjoyment. For those who remember, I ranked this show fifth on my top ten anime comedies. What I didn’t say was, Nagasarete Airantou was in the running for number one for the longest time. I love this series.

That didn’t change after watching it a second time. It reaffirmed why I placed it so high. And if I were to redo the list, which I plan to, don’t be surprised to see it even higher.

If you get anything out of this review, let it be this. Nagasarete Airantou is the perfect series to relax to. Even with twenty-six episodes, it is a joy to watch again and again. How could I not showcase it here during Pre-Blog Month?

To go into more detail, I’m not sure where to begin. It was all the little things about this series that made it so special. Having seen so many ecchi and harem anime with similar goals, there’s a charm to this one that separates it. 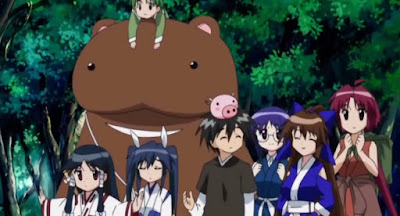 Would I classify this as an ecchi anime? Yes, but entry level at most. There was nothing outlandish here. Compared to the s@#$ I’ve seen, this was child’s play. Yeah, it had fanservice, don’t get me wrong. Yet it wasn’t what made this show worth watching. Take it away and you don’t change anything that’s good about it.

Something a lot of other ecchi anime fail to grasp. If you can’t handle this, I can tell you of a few shows that’ll make your head explode. 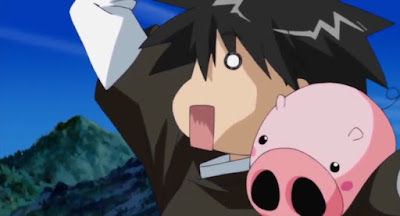 Would I classify this as a harem anime? I really don’t want to. Sure, there is a single person at the center of all the affection. Except, a lot of that affection isn’t what I would call romantic. Most of the “suitors” have their own reasons to be with the center outside of love. 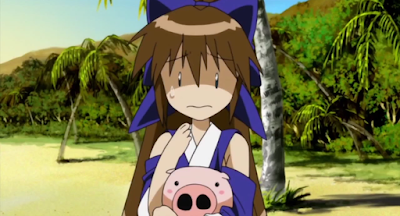 Ayane (voiced by Saeko Chiba) wanted to beat Suzu. Machi (voiced by Mikako Takahashi) was maniacal. Chikage (voiced by Shizuka Ito) was only looking for a subject to study. And Yukino (voiced by Shizuka Hasegawa) liked Ikuto as a kid who loves their older brother. Rin (voiced by Ryoko Shiraishi) would be the only one other than Suzu who had true romantic feelings for Ikuto. 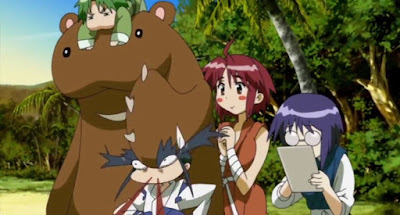 But it was Ikuto himself that makes me not want to call this a harem anime. He just wasn’t interested in it like your average center would've been.

It’s hard to have a harem when you’re missing the most important piece.

For this show being an ecchi and harem weren't focal points. Because of this, this series was a refreshing take on both. While at the same time, it was its own thing. I can’t think of another anime quite like it. 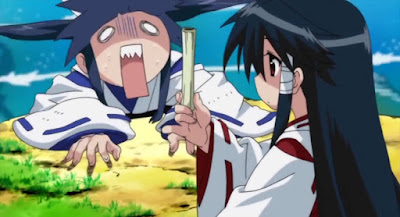 With that out of the way, what exactly is Nagasarete Airantou?

The show’s cute. It tried to be as cute as possible throughout. From that came much of the comedy. The humor relied a lot on the on the physical and the visual. But never did it go overboard. It stayed at the right level of energy the entire time.

Yet it was never reserved. 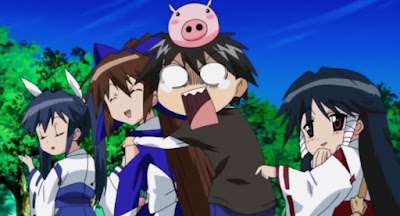 Airantou was silly. It was goofy. It stayed laid back and easy going. In this atmosphere, the series thrived. Although the big picture was always present, it never took away from the fun. Ikuto was stranded. That was a fact that never got forgotten. But at the same time, that didn’t mean he couldn’t make the most out of the situation. 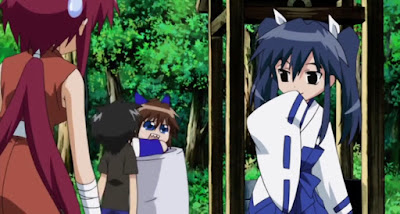 The island wasn’t a difficult place. Sure, there were difficulties with living in a deserted society. Except it was never something to dread. A good time was always available if you so desired it. Airanto captured the full meaning of this.

With that, it brings us to Airantou’s biggest strength. 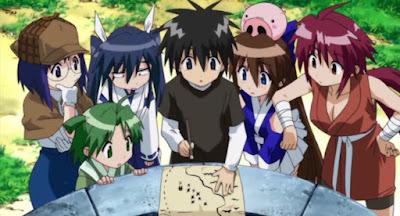 This series overflowed with personality. Everyone on this island, human or not, were their own characters. No one was a duplicate. Ikuto was Ikuto. Suzu was Suzu. And so on and so on. With only reactions and mannerisms, I could tell you who everyone was. Without looking at physical characteristics.

No matter the circumstances, characters would react in ways only they would react. The island’s residences were more than pretty faces. There are plenty of shows that come to mind which didn't understand this. Having big breast is not a characteristic. Imagine that.

Airantou didn’t waste this advantage either.

This series would suffer if it had a smaller cast. There was plenty of mixing and matching going on. There were a lot of different interactions. Ikuto and Suzu may have been around often. But they didn’t have to be. All the characters could carry this show.

That said, the two characters I do want to focus on are Ikuto and Suzu.

Ikuto was a great lead. Though at the start he may not have looked it. He found himself in an overwhelming predicament. While other leads would've been whiny bitches about this, he wasn’t. Ikuto was proactive. He was reliable. He was capable. He didn’t let things happen without trying. He didn’t let others do all the work. Had this been a true harem anime he would’ve been the ideal center.

Suzu was adorable. She was innocent and a sweetheart, but she wasn’t naïve either. Remember, she grew up on this island. She knew the people of her village. Because of this, no one could take advantage of her. Suzu couldn’t be easily tricked. She was always aware of what was going on and wasn’t a throwaway airhead. It wasn’t hard to start caring about her.

I could go over each character one by one. It would take all day. But it wouldn’t be a challenge. Other than the fact it would make this review too damn long, part of the fun is seeing it for yourself. 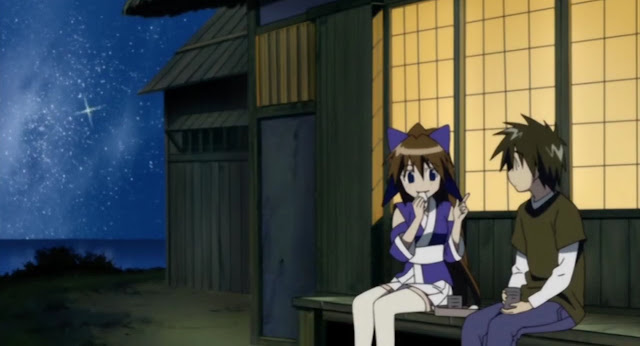 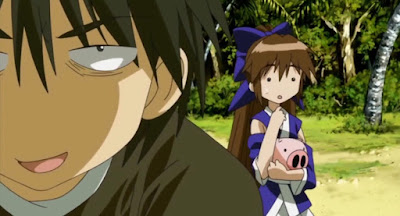 It’s nitpicking time. I have no major issues with this show. Yet, there were two things I couldn’t help but notice. 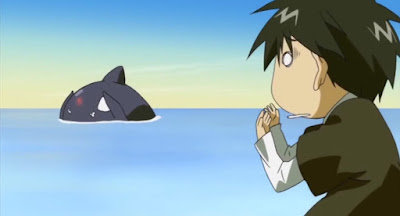 First, don’t think too hard about Airantou’s premise. Once you do, it starts to fall apart real quick. How did this island become inhabited by only women again? The men got lost at sea during a storm? Okay fine, but this show makes it come off as if this happened some time ago. So long ago, it appears none of the younger residents have any memory of the event. I don’t quite buy it. 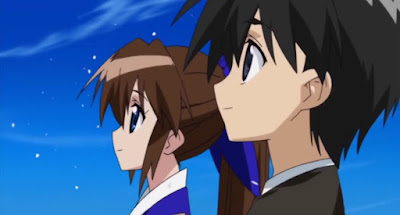 Machi was eighteen. She was Ayane’s older sister. So, that made Ayane around fifteen, fourteen at the youngest. Suzu, I would bet, was around the same age Ayane. Furthermore, Yukino is the youngest by a decent amount of time. To be conservative, we’ll say by at least two years. Making Yukino twelve at the oldest.

And I’m actually going to stop saying things now. After mapping this logic out, it’s not as far-fetched as I once thought. Though it still kind of bugs me, it’s even more of a non-issue than it first was.

The other thing I want to mention is certain parts of Ikuto’s personality. He was one of those characters that didn’t give girls enough credit. One time which irked me was when he refused to fight a woman. A woman who challenged him to a fair sparring match. And he only refused her because fighting women was against his principle. His principle being men should protect women. By itself, that sounds chivalrous. Except here it was arrogant.

Everyone on this island was capable of taking care of themselves. It was Ikuto who need the most protection if anything. So, every time he said something like that, I cringed. Was this the worst example I’ve seen? Not by a long shot. By the end, Ikuto kind of broke out of it.

And that’s all I have to say negative wise. Considering how great this show was, they’re easy to ignore. 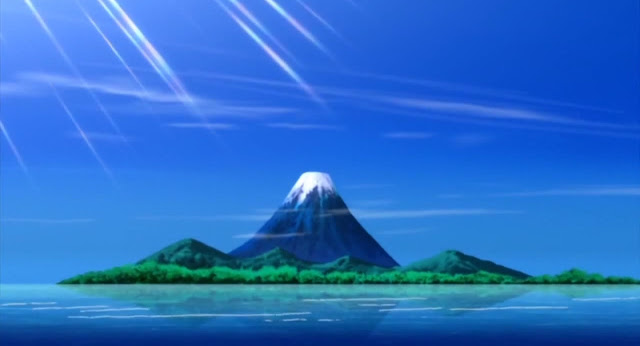 It was an absolute treat coming back to this series.

Nagasarete Airantou was a ton of fun. I’m sure I’ll find my way back to it again. Hilarious to no end, it’s feel good all around. Easy to pick up and watch, it’s hard to match this series’ charm. And with a huge cast of unforgettable characters, there’s so much to love about it.

In fact, I can’t get enough of it. You better believe I’ll be picking up the manga. As for one more quick negative, twenty-six episodes wasn’t close to enough. Then again, I guess you could claim that as a positive as well.

Nagasarete Airantou is certainly worth your time.