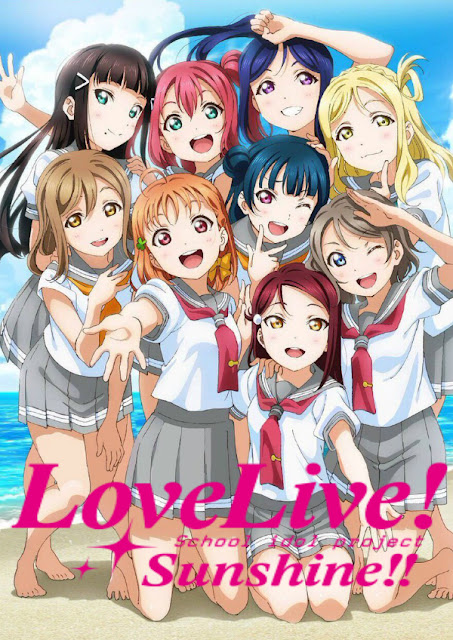 Chika Takami (voiced by Anju Inami) makes a life-changing discovery. While visiting Tokyo, she is awed by the recent winners of the popular Love Live competition; the school idol group µ (muse). Their humble origins inspire Chika to head down the school idol path herself.

She soon learns, that’s much easier said than done.

Yet if there’s one thing Chika's known for, it’s persistence. Starting small, she turns to her best friend You Watanabe (voiced by Shuka Saito). The two run into roadblock after roadblock. But they make a major breakthrough after recruiting the recent transfer student Riko Sakurauchi (voiced by Rikao Aida).

The trio inspires more to join. Next are longtime friends, Hanamaru Kunikida (voiced by Kanako Takatsuki) and Ruby Kurosawa (voiced by Ai Furihata). Then they pick up the eccentric Yoshiko Tsushima (voiced by Aika Kobayashi).

The group gets their final push when they, at last, convince their school’s former idol group to come out of retirement. Third years Dia Kurosawa (voiced by Arisa Komiya), Kanan Matsuura (voiced by Nanaka Suwa), and Mari Ohara (voiced by Aina Suzuki).

Together, these nine girls form Aqours (pronounced aqua). Their goal is nothing less than winning the coveted Love Live competition. 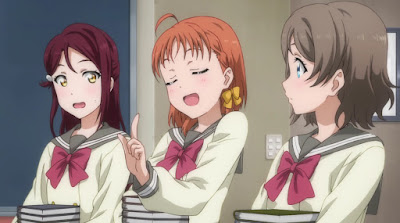 Love Live Sunshine was a little surreal to sit through. I never thought I’d say such a thing about this series. There was just something about it.

As it stands, Sunshine is much better than the film. Yet when compared to the original, it’s the weaker. I’ll go into more detail why that is later on. But overall, there’s no doubt this was part of the Love Live series. It didn’t feel any different. 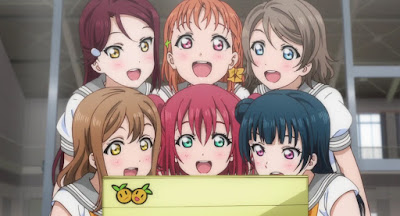 In the first show, A-Rise inspired Honoka to create her own idol group. It became her way of saving the school she loved. It was difficult at first. She only had her two close friends supporting her. As time went on, the team began to grow. 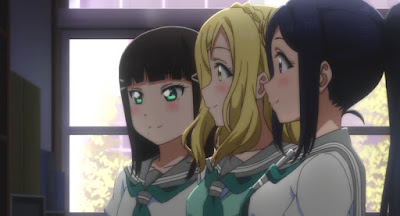 Eventually, µ came to be a close-knit group of nine. On the technical side, µ was three first years, three second years, and three third years. Together, they worked hard to win Love Live. In the process, they managed to save their school. As well as learned how important their friendship was to them.

In Sunshine, µ inspired Chika to create her own idol group. It became her way of saving the school she loved. It was difficult at first. She only had her two close friends supporting her. As time went on, the team began to grow. 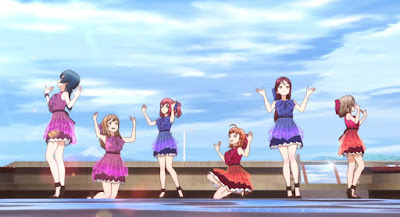 Eventually, Aqours came to be a close-knit group of nine. On the technical side, Aqours was three first years, three second years, and three third years. Together, they worked hard to win Love Live. In the process, they managed to save their school. As well as learned how important their friendship was to them. 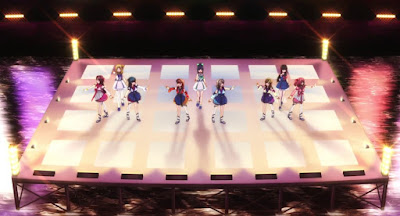 See, no difference. No difference at all. None what so ever. They’re the same. One-hundred percent, I’m not making this up, the same. THEY’RE THE F@#$ING SAME SHOW!

Sunshine is the result of what happens when a story finished way before it was ready to finish. If you’ve seen the first one, then you’ve seen Sunshine. Albeit Sunshine is a weaker version of the original.

Is there nothing Sunshine can claim as its own? Sort of. 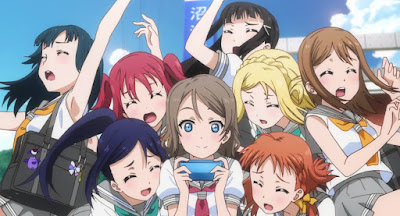 µ has the definitive edge. That said, Aqours was enjoyable. 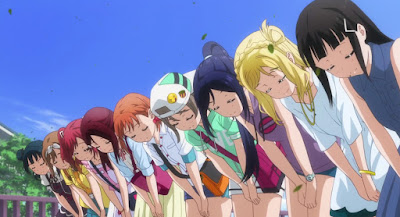 One of µ’s strength was their varied personalities. That’s maybe giving this series way too much credit but play along for a second. As a complete nine, the members of µ didn’t feel all the same. Some were more reserved. Some were more energetic. And some were right in the middle. 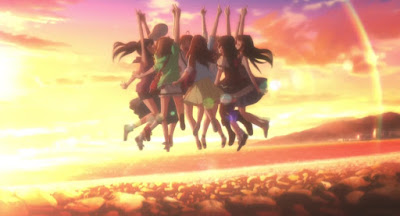 Aqours, not so much. They didn’t become worth mentioning until they became nine. Once that happened, they were a fun group. A one note, high energy group. But a fun group nonetheless. They were all good friends and they loved each other. But certain divides were either too hard or nonexistent.

For example, the third years, Dia, Mari, and Kanan, were their own thing. They had a history. As a negative, this made them come off as the distinct third years of Aqours. Instead of coequal members. As a positive, though, they brought with them more hands-on experience. This was something µ never had to work with. It was a new angle.

On the flip side of that, you couldn’t tell the first years from the second years. Due to this, Aqours felt more like a complete group much sooner than µ did. Had the show stopped at six, it would’ve opened up more room. The downside to this is the necessity.

Why not have this new idol group be first years? That way, the series could potentially spend three seasons building a new team. Sunshine is now stuck in the same position as the first show.

One more thing. Yoshiko Tsushima is now my favorite character of this franchise. She was the most unique and interesting person from either Aqours or µ.

Rivaling even the movie's quality, Sunshine was well animated.

There were many beautiful shots. The colors, the movements, everything was stepped up. Numazu is a much more breathtaking place than Tokyo will ever be. Sunshine used this to its advantage.

Even the concerts were much more visually appealing. Granted, the stupid, not to mention distracting, CGI was still a thing. But it wasn’t as prevalent. Of the anime, the best performance came from Sunshine. However, it didn’t come from Aqours. It was instead from a rival duo, Saint Snow. It was a good performance. Any CG that got used, I didn’t notice. Also, it was a pretty kick ass song. 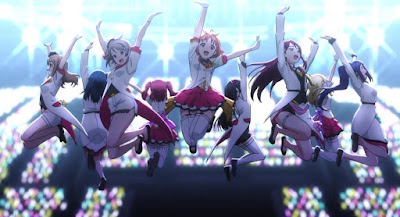 Being a blatant rehash is bad enough. From the same set up to the same conclusion, this series is the definition of a waste of time.

What made it worse, the series wasn’t subtle about it either. Although µ never appeared in Sunshine, something I'm shocked didn’t happen, their presence was known. Chika didn’t hide who her idols were. She wanted to do what µ did. She wanted to follow their path. 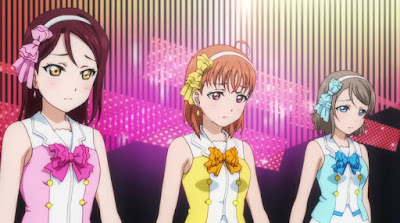 This led to was a decent message. But the route the series took to get there was unnecessary. Following a similar road is one thing. Yet going damn near beat for beat is something else.

Sunshine, however, did distinguish itself in one key area. Too bad this was the one area that should’ve been a direct rip-off of the original. 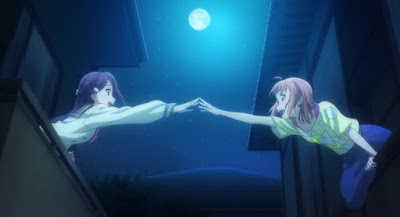 I’m not blind to what the Love Live franchise is. Its sole purpose has been to sell merchandise to idol fans and otakus. And you know what, it’s working. 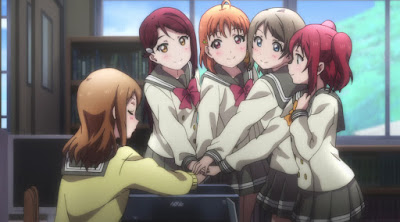 If you get the chance to make it over to Akihabara, you won’t go five minutes without running into something Love Live related. This is a manufactured product that has stuck. While that sounds kind of gross in the capitalism-is-bad sort of way, the series did earn a bit of my respect. 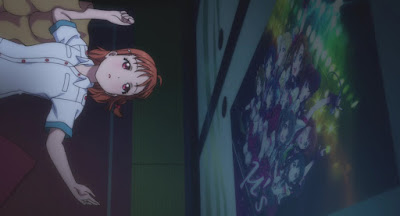 The original Love Live showed µ getting better. The girls were always working their asses off. They put the time, energy, and dedication into becoming the best they could be. For each live performance they did, it felt earned. Any time they failed, the weight was heavier. Any time they succeeded, the triumph was sweeter.

This was the K-On problem all over again. Aqours hardly ever practiced. Things kept falling into place for them. Instead of seeing them grow, you just had to assume they did.

But even K-On didn’t go as far as Sunshine did.

Aqours did have a failing moment. One that was much more severe than µ ever went through. And you know what, I didn’t care.

Of course, they failed. They should never have been in the position they were in. Aqours never earned the right to say they tried their best. Many of the girls wallowed in frustration. To them, it was hard to imagine how they could’ve done so bad.

To that, I say, "What did you think was going to happen?" The only things they seemed to be good at was doing everything except becoming an idol group. As far as I’m concerned, they did f@#$ all. 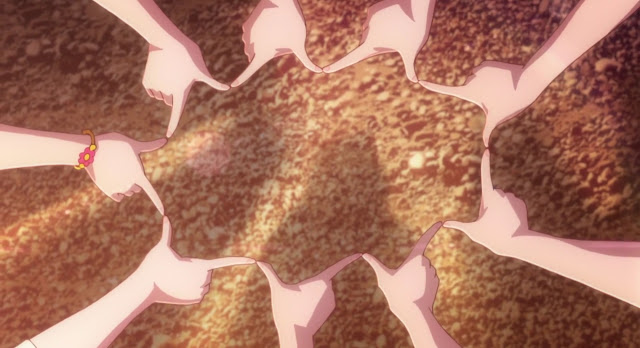 Despite all I've said about this show, I’m going to give it a recommendation. But it is a direct recommendation to a certain group of people. And those people are those who are true fans of this franchise.

Although I enjoyed the first Love Live, I can't say it's one of my favorites. If you’re in my position, you can skip this one. Sure, Aqours was a fun group and the animation was nice. But so what? Love Live Sunshine copied everything except the parts that mattered.

Do I think this is the last we’ll see of Sunshine and Aqours? My gut says no. I think there’s plenty more that can get milked.


But these are just my thoughts. What are yours? Have you seen this show? How would you advise Love Live Sunshine? Leave a comment down below because I would love to hear what you have to say.


Others in the Love Live Series