***Warning, the following may contain spoilers for New Game. Reader discretion is advised.*** 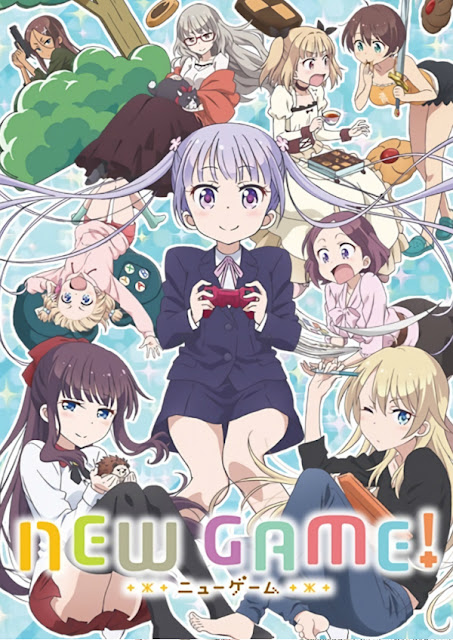 Aoba Suzukaze (voiced by Yuki Takada) is about to realize her dream. As a child, she fell in love with the game Fairies Story. Particularly the beautiful artwork and character designs. Since then, she has wanted to be a character designer. Thus she got a job as the game studio, Eagle Jump's, newest artist.

Racked with nerves and excitement, Aoba has no idea what the future has in store for her. Or at the very least, she didn’t expect to find a woman in her underwear sleeping under a desk. Aoba is struck with awe when she realizes the woman is none other than Ko Yagami (voiced by Yoko Hikasa), the character designer for Fairies Story. The very person who inspired her dream.

There's a lot to learn and the work is difficult. But Aoba is dead set on producing the absolute best game possible.

Aoba will come to realize the backbreaking amount of time and dedication it takes to make something worthwhile. 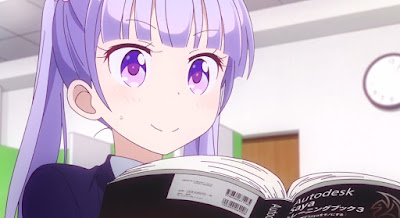 New Game was a lot of fun. It was also cute and at times quite hilarious.

This show is without a doubt a high school slice-of-life story. Before watching, I had already made a few assumptions and most of them were dead on.

In line with the jokes, atmosphere, characterization, and the entire cast being female, New Game fits right at home with the other entries in this genre. As a nice bonus, it's right up there with the best of them. The only thing which separates this show is the fact that it doesn’t take place in a high school. 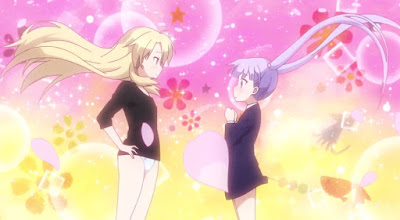 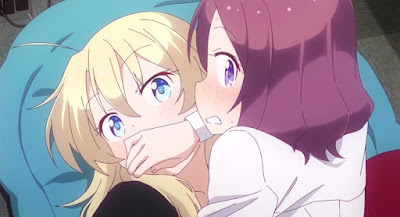 For instance, if someone needed to be a drunken buffoon, there didn’t need to be an elaborate or convoluted reason to get them in such a state. No getting drunk off small amounts of alcohol in sweets. No smelling the fumes of booze. Or my personal favorite, having some kind of condition were carbonated drinks can get someone sauced. In New Game, people could just drink beer.

Problems felt a little direr since they weren’t limited to passing an important test. I’m not saying an exam isn’t stressful, but the perspective changes when compared to things like deadlines. The consequences of failure no longer result in a failing grade. An entire livelihood can be in jeopardy. 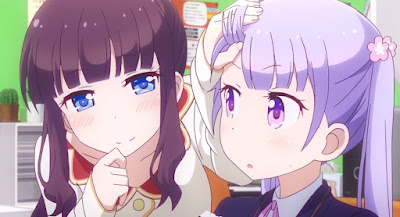 I'm overblowing this since New Game never hit that level. Actually, this series made the video game industry look like it was a lot of fun. I don’t work in that industry, so I can neither confirm nor deny such a claim. Yet based on stories I’ve heard, I have my doubts.

Regardless, I didn’t watch New Game to research a possible career change. 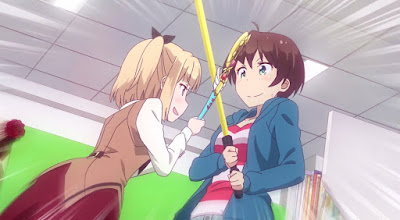 This series prioritized the group over the individual. There weren’t many moments when a character was by themselves. Most actions and interactions involved two or more people. Also, the main group was closed off. An outsider would need a considerable amount of time to be fully brought in. 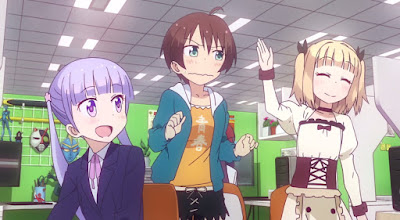 This allowed for an air of familiarity. The employees of Eagle Jump worked in close proximity to each other. And at a job which could often require staying overnight in order to get something done. Eventually, a person would start to notice the different nuances in colleagues. 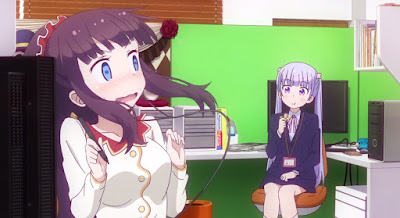 Ko would often not go home for days. It became expected to see her working at her desk or sleeping under it in the morning. Because of this, Ko also developed a habit of taking off her pants after hours. A huge surprise for Aoba on her first day. But by the final episode, she had come to accept it as a thing that was going to happen.

The way everyone talked to each other, their teamwork, and even the way they would get on each other’s nerves, fueled the show’s comedy and made the entire series hilarious. 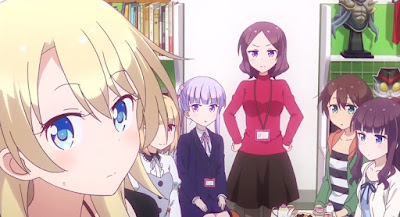 Aoba had achieved her dream in a spectacular way. She had become a character designer for the very developer who made her favorite game. Her supervisor was also none other than the person who inspired her career path. Ko was the pinnacle of who Aoba wanted to be.

Ko on the other hand, had no interest in anything other than her art. Her experience and skills made her a prime choice for higher positions. A result of her high personal standards. Too bad her perfectionism tended to cause tension. That wasn’t something she wanted to be known for.

One last thing. For a show which emphasized the group, the amount of personality given to many of the characters was impressive. There may not have been many instances where a single person filled the time. But there were plenty who could've done the job.

Aoba’s teammate, Hifumi Takimoto (voiced by Megumi Yamaguchi) was my favorite character. To the outside observer, Hifumi appeared cold. Then once you learned she was also fantastic at her job, a little arrogant. Except her co-workers knew she was just incredibly shy. In truth, she was one of the nicest people ever. You could see this through her perffered communication method, email. Hifumi became more expressive and had no problem being an active contributor. Also, this was super cute.

Oh yeah, that was another thing. New Game was stupidly cute. 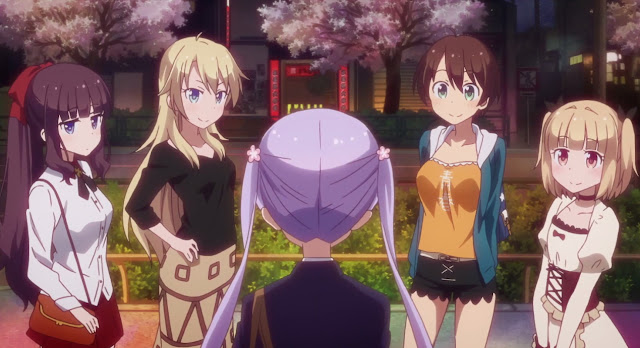 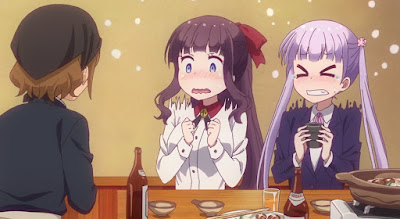 New Game had a lot of blatant fan service. For a show centered on game development, this series found a lot of excuses to have characters be in their underwear. The reason I don’t really hold this against the show is because I’m more impressed it managed to do it. That and it helped having the series not be set in high school. 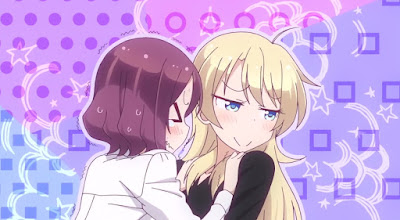 Also, and I think many would see this as a negative, there were no guys in this show. I don't think of this as a bad thing either. I just find it interesting. None of the characters interacted with a man. Even the backgrounds were void of testosterone. Joshi Kosei, which took place in an all-girls school a few male teachers. Nothing in New Game.

A Lot of Detail 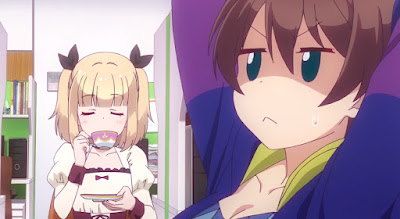 What I’m about to say is a problem. But if a show’s going to have one, this is not a bad one to have. 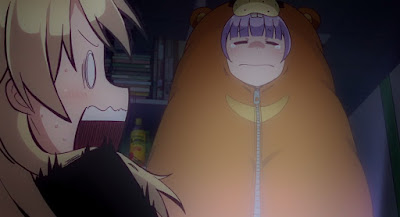 New Game fell into the same trap many other one season anime have. It tried to do a lot and included a ton of small details. Character traits were underused or existed for the purpose of a single joke. When shows do this, it’s usually a sign that the story is throwing ideas at you. Hoping a few will stick.

Desperation in its purest form. 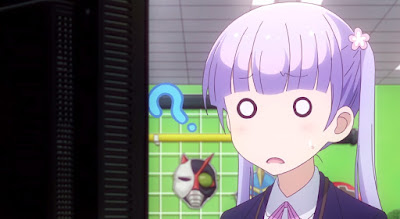 What's strange about New Game, it didn't do this with bad ideas. These tiny details worked or at least had the potential of making something happen. What's usually a big annoyance for me, helped make this show more fun.

Why am I listing this as a negative? Well the same principle still applies. There was a lot going on and many things never had a chance to develop. The fact these were good ideas make it worse.

Take Yun Iijima (voiced by Ayumi Takeo) and Hajime Shinoda (voiced by Megumi Toda). Both were members of the character design team. Actually, Hajime was part of the motion department. And that right there is what I’m getting at. 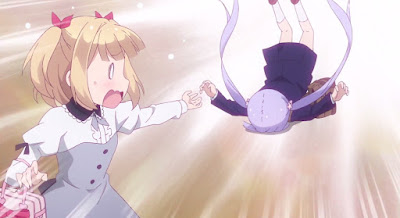 I know this small piece of information, but why? I also know that the only reason Hajime was in the character department. There was no room in motion. If given the choice, she'd rather be with her team.

That sounds like the making a pretty good episode. Too bad it was never brought up again.

With Yun, I know she has two younger siblings. Siblings she might be looking after by herself. The kids showed up once to have a reason why the entire team went to see a certain movie. Yet, the team never ran into each other and never discussed the film.

This list could keep going with these two alone. However, the same can be said for every single character.

Aoba’s role of the lead got challenged. Ko could become distant. Even Hifumi’s use of email communication was only used in maybe the first two episodes. 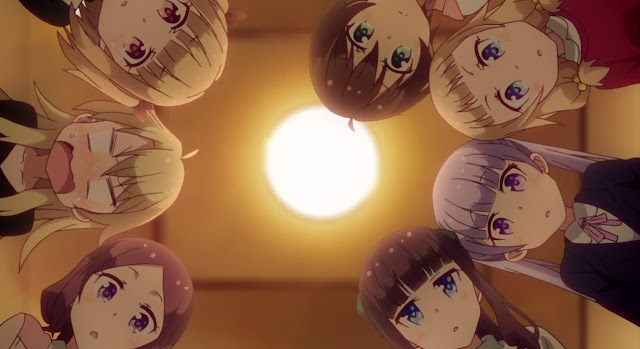 A season two would be appreciated. These characters and this show are nowhere near spent.

This could be the start of a long running series. New Game has great characters. A great premise. It's cute and funny. Why wouldn’t a second season get made?

However, I don’t need that second installment right now. This series, even with all it wanted to do, managed to stay self contained. As well as end on a satisfying note. Still, there will always be a place for another review.

Until that day comes, New Game is certainly worth a watch.