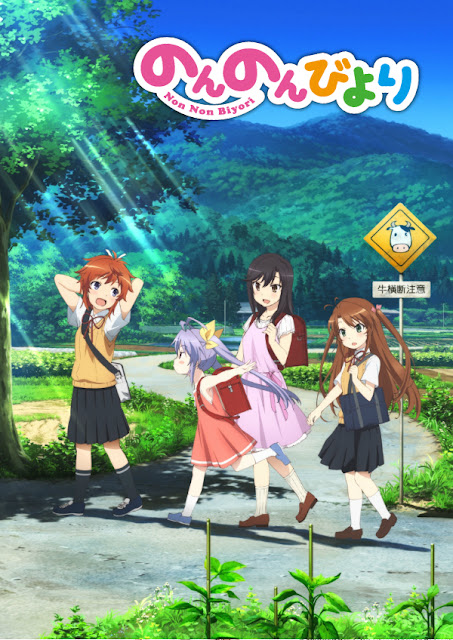 Welcome to Asahigaoka, a small village far and away from the conveniences of the big city. There are no large supermarkets. The trains and buses are few and far between. And the only school consists of five students in one tiny classroom.

Renge Miyauchi (voiced by Kotori Koiwai) is your typical first grader. She is curious about the many oddities of life around her. She knows little and cares even less about the world outside her hometown.

Hotaru Ichijo (voiced by Rie Murakawa) is a transfer newest student from Tokyo. Though awed by the unfamiliar atmosphere, she grows accustomed to country life. Her soft-spoken demeanor envelops her in a mature light. Despite only being in the fifth grade.

Sisters Natsumi (voiced by Ayane Sakura) and Komari Koshigaya (voiced by Kana Asumi) are in sixth and seventh grade. Natsumi's energetic, impulsive and a poor student. Komari is self-conscious about her short stature and does not do well with scary things. They also have an older brother named Suguru in their class. But he doesn’t say much. 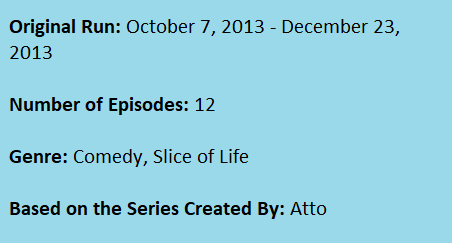 The four girls live a different their life than your average grader-schooler. Yet in many other ways, things remain very familiar. 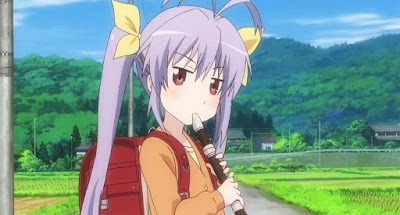 I’m serious, there isn't more I need to say. This was a fantastic series. If you left now to go watch this show, you would not be making the wrong decision.

To start, let’s talk about Nichijou.

First off, if you haven’t seen it, you should! 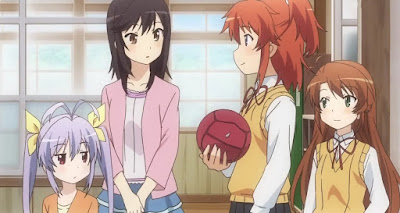 Second, if you have seen it then you know that it’s unparalleled insanity. It’s one of the funniest series I have come across. Non Non Biyori is Nichijou’s other end of the spectrum counterpart. And it works wonders in its own way. 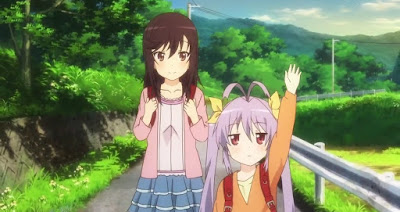 Nichijou and Non Non Biyori derived humor from the same source. They are situational and segmented. However, Non Non Biyori goes at it at a relaxed pace. The comedy wasn't subtle, but it wasn't in your face and over the top either.

Continuing with the motif of the show, Non Non Biyori has that countryside feel. 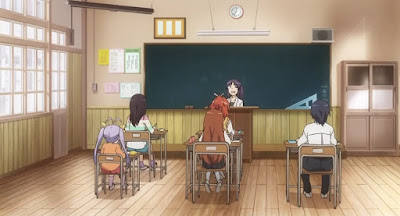 The calm style of the show did more than adding to its humor. Non Non Biyori had many long pauses. Though you could argue padding, this series used these moments in an effective way. These hanging shots added strong instances of character. The best way I can describe this show is to say it was "authentic". 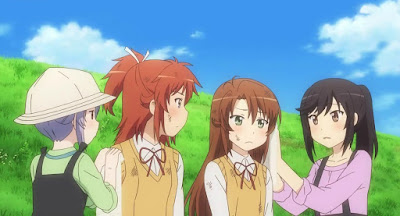 By the end, you feel as though you know these characters. Since the show wasn't in any rush, each of the girls got their fair share of development and screen time. While Nichijou is superior, this is one area where Non Non Biyori has the clear win.

Please enjoy what this series has to offer. Whether it be the dialogue, the situations, or the characters. Yet be sure to take a moment to look at what's going on around these things. 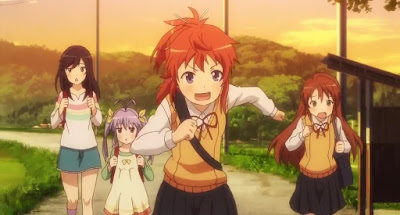 The scenery and background art was gorgeous. I can attest to the beauty that is the Japanese countryside. This show did an outstanding job at capturing it. If given the privilege, I would love to live in a place like Asahigaoka.

Non Non Biyori is a perfect show to finish off a day. So, while I nothing but admiration for this series, there are one or two things I noticed. 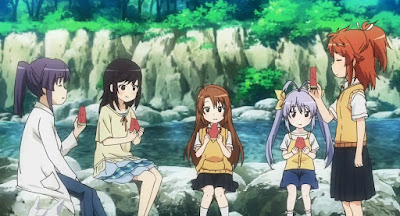 The show built itself to work in a slower environment. It didn't warrant itself to a lot of flash or movement. This is a style Non Non Biyori nailed. Yet, there were a few occasions, where the series attempted Nichijou-type humor. It did work as well.

There was also a reoccurring joke involving Natsumi and Komari’s older brother. He was unpredictable and more often than not, it was funny. Not always one hundred percent, but still high.

These are nitpicks. They don't bother me. Yet there was one thing Non Non Biyori didn't need.

There wasn't much fan service in this show. The small amount that existed was minuscule. In fact, it almost doesn’t feel right to label what I saw as fan service. But I don’t know what else to call it.

I’m referring to Hotaru. Not for a second to I buy her being in the fifth grade. In actuality, all the girls, other than Renge, would be high schoolers in any other show. Would that have made the series better? Not in the slightest.

The reason I bring it up is due to what Nichijou managed to do. Those characters are in high school. And unlike any another anime set there, there isn't an ounce of fan service. One the funniest shows I can think of and it doesn't do the mediums biggest calling card. Non Non Biyori was in a similar situation. Making a touch disappointing it didn't follow the same path.

I said it at the start, I will say it again. Non Non Biyori was fantastic. I had a great time with this show.

I have never felt so relaxed and calm while watching anything before. The humor was great. The characters were so fun. This series was beautiful to look at. By far, this is one of the best anime I've seen.

A few, almost nonexistent issues aside, I cannot recommend this one any stronger. That's why I'm thrilled there's a second season. And yes, can be sure I will be reviewing that one very soon.

Posted by LofZOdyssey at 8:01 AM