***Warning, the following may contain spoilers for Fairy Tail. Reader discretion is advised.*** 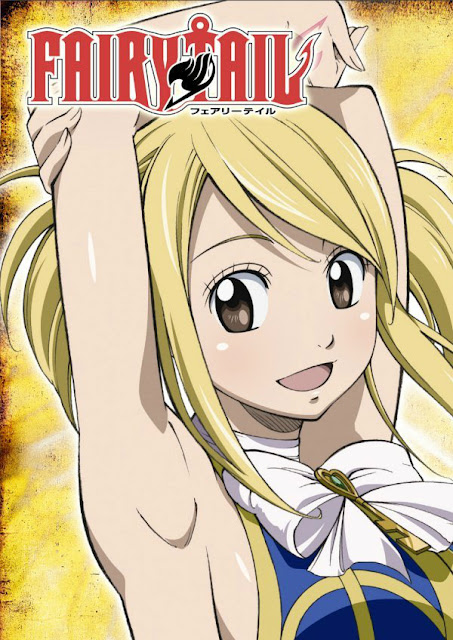 This season made sense. Fairy Tail is progressing along as I imagined it would be. It got bigger. More characters got introduced. The challenges are becoming more and more difficult to overcome.

In turn, the action is getting more intense. The powers of characters are growing. Their backstories are now more detailed. If this continues, that would be fantastic.

This season didn’t go backward. Although season one was better. Believe it or not, that had much to do with the difference in length. Yes, twenty-four episodes are easier to sit through than forty-eight. Except what happened during those episodes is more important.

Season two’s biggest strength and weakness was its episode count. This season didn’t have some of the problems of the first. That doesn’t mean it fixed those problems. Fairy Tail season two played out different than its predecessor. This was both good and bad. But it was never better.

That said, season two had plenty of moments that were outstanding. As well as many more moments that helped give weight to everything that has occurred so far. I’m still enjoying this series. That has not diminished. 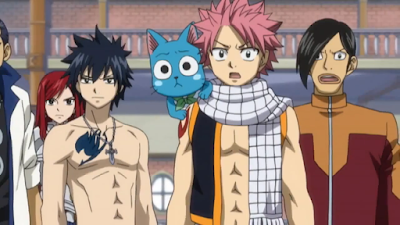 In the last review, I mentioned Lucy’s uselessness. Though I love her as a character, she wasn’t that helpful in a fight. She never could hold her own despite her great potential. While she may not be at the level I know she’s capable of, she’s much closer now than at the end of season one.

Lucy had a few standout instances. For starters, she completed a job by herself. This was more than her not relying on her team. She was smart in using the skills she had. She picked the best spirits for the task at hand. In the process, she proved she was a wizard. She wasn’t a joke. 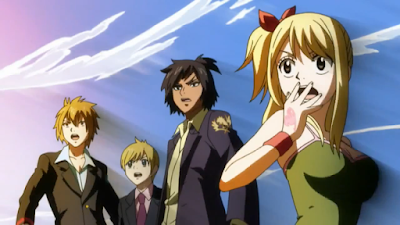 Afterward, Lucy fights fell back into the same trap. It was a lot of her not knowing what to do. Even though there were plenty of acknowledgments of her abilities. 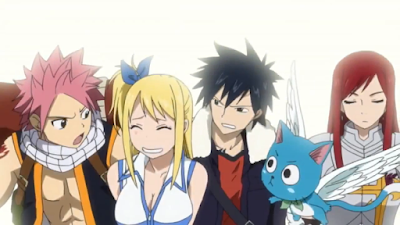 The enemies treated Lucy at the same threat level as Natsu and Gray. Granted, the enemies didn’t think anyone was that much of a threat. Nevertheless, she was never seen as lesser. That’s important because it's reinforcing the truth. No one should underestimate Lucy. That’s why it sucked that her battles still weren’t at the level of intensity as the rest of her team. 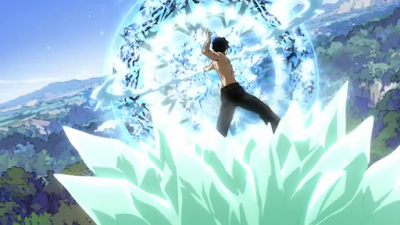 That notwithstanding, one of the coolest scenes from the season was Lucy’s doing. For the first time, we got a clear look at how much power she has. To be fair, this involved doing something, not in her usual move set. Except this spell may be something she can do later. I guess we will find out. Regardless, it wouldn’t have been possible if Lucy was indeed useless.

Reviewing Lucy’s progress may become a recurring theme throughout the month. If true so be it. This is a character I don’t want to see fail. 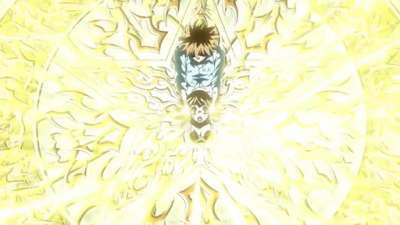 Unlike the last season, season two only contained two arcs. Though the second one was more of an afterthought. We will get to that. The Nirvana Arc, on the other hand, took up the majority of episodes.

Here’s a quick rundown of the synopsis. 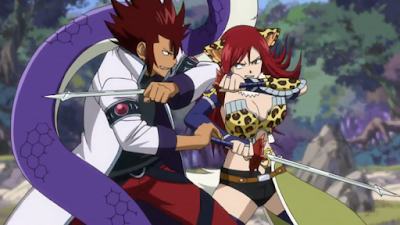 More and more Dark Wizarding guilds have started to appear. Most weren’t much to speak of. There were three, though, that were no laughing matter. To make it worse, these three guilds formed a powerful and dangerous alliance.

One of these three, Oracion Seis, was trying to unleash a frightening weapon. Known as Nirvana, it could shift the balance of light and darkness, causing unimaginable destruction. The light guilds decide to form an alliance of their own to stop Oracion Seis. The resulting team up included Fairy Tail, Blue Pegasus, Lamia Scale, and Cait Shelter. 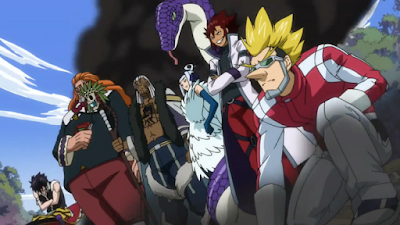 Overall, this storyline was a mixed bag. At its core, this arc had several solid pillars. These key features made the whole thing as fun as everything else in this show. And these features needed to be strong since they were supporting a lot of problems. The main one being the length. 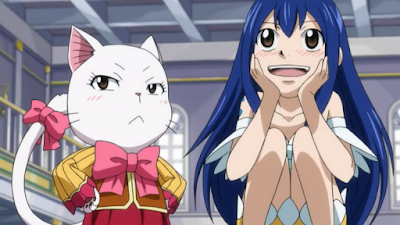 As I mentioned in the last review, Fairy Tail had a habit of finishing what it started. That wasn’t untrue here. However, season two did jump around more. While any given set of episodes were dedicated to a single situation, other things did happen. This was much more prevalent near the beginning.

Makes sense since this was when the crew was at its full strength. 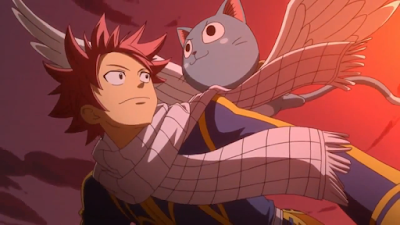 Then there came a point when the light alliance needed to split up. Many of the pair-ups were fine. Of course, the group of Natsu and Gray was the most interesting. Yet that was the case because we knew the most about them.

But due to there being a lot going on, this season couldn’t focus on only them. The problem was, not all the teams were worth caring about. 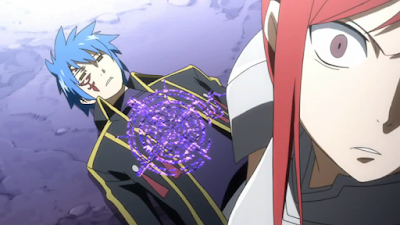 Lamia Scale and Cait Shelter were fine, I’ll get to them. But most of Blue Pegasus were annoying and did little to affect anything. The leader of Blue Pegasus being the worse of the bunch. If you still think Lucy is useless, wait until you get to this shmuck.

Because some teams weren’t that engaging, the story took a long time to get going. Part of this had to do with Erza being out of commission for most of it. Once she got back into the fight, the season picked up. Right before that, there was an amazing team up. 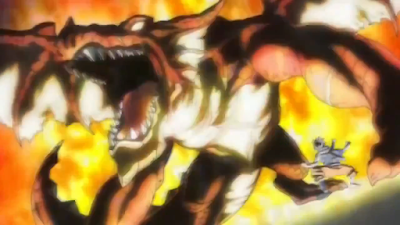 The Lamia Scale representatives had with them one of the ten most powerful wizards in the world. That was neat, except he wasn’t as pivotal as his teammates. One of them being Lyon Bastia (voiced by Yuki Kaji) from season one.

I didn’t mention him by name in the season one review, but he was the main antagonist of the Moon Drip Arc. Plus, he had a long, albeit strained relationship with Gray. The Nirvana Arc brought Gray and Lyon closer to settling their differences.

And that was what this arc did that made this season great. I can’t say it brought closure to everyone. What it did do was offer a second chance. Nowhere was this more powerful than between Erza and Jellal Fernandes (voiced by Daisuke Namikawa).

Another character I didn’t mention before, Jellal was the antagonist of the Tower of Heaven Arc. He was also the person responsible for numerous atrocities. Not to mention, he was Erza’s dearest friend at one point.

During their past, Jellal succumbed to frightening magic. Thus, corrupting him. Erza and Natsu defeated him at the top of the Tower of Heaven. In the aftermath, Erza couldn’t help to think there may have been a way to save him. For she knew Jellal was once a good man. Cut now to the Nirvana Arc and it seemed as if that may be true again.

This led to an outstanding conclusion. A conclusion that included an awesome final fight. At last, we got to see the dragon within Natsu. Plus, season two did more to the never give up nature of Fairy Tail wizards than season one ever did. That’s saying something since season one didn’t fail in this aspect.

Last but not least, there was the inclusion of Wendy Marvell (voiced by Satomi Sato). The sole representative of the Cait Shelter guild, I cannot wait to see more of her in this series. She's the innocence that’s been missing from the Natsu, Lucy, Gray, Erza team. These four may be great, but they’re a little rough. Hopefully, Wendy can help offset that a bit. 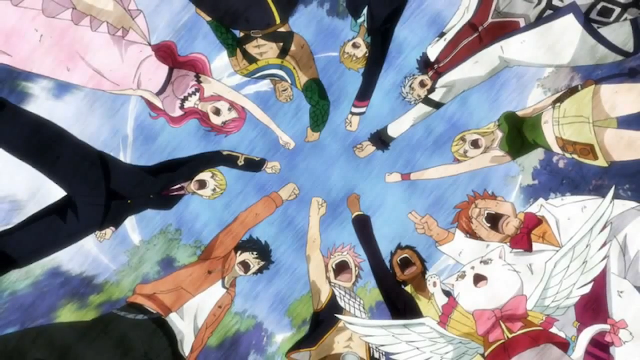 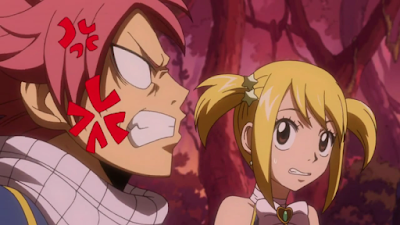 I need to stress how slow the beginning of the Nirvana Arc was. Yes, it had plenty of moments. Getting to those moments was a tad arduous. It was never boring. It was just, not as good. 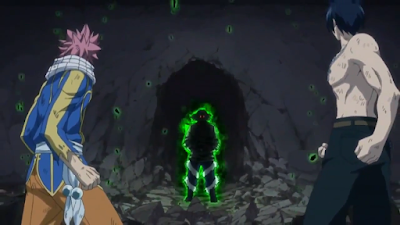 Due to how long this arc was, it meant a lot of other characters weren’t around. One of the highlights of season one was the Fairy Tail guild. It consists of a never-ending supply of colorful members. And they are all welcomed additions. The second season tried to expand this and nailed it on occasion. Wendy being the most notable. 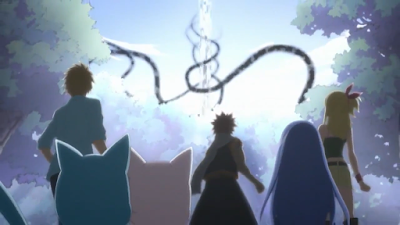 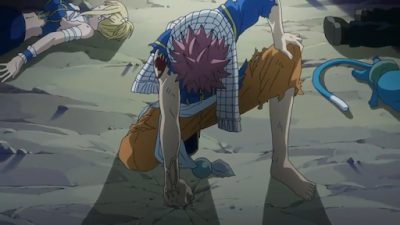 And like it was in the first season, there was no break between the arcs. To be fair though, by the end of the Nirvana Arc, there were only four episodes left of the season. Due to that, I kind of expected this season to mess around a bit. I didn’t think there would be another arc. Having now seen said arc, I wish season two had done four random filler episodes.

What it did instead was dumb. 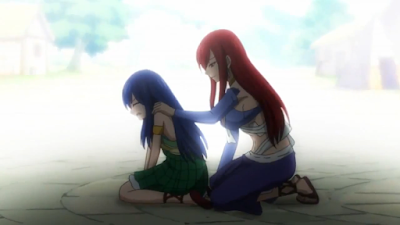 Natsu learned from Gray there was a woman claiming to have seen a dragon. Thinking this may be a lead to finding the dragon who taught him, Natsu went after this person. But this was a trap.

A mad scientist name Daphne (voiced by Yu Kobayashi) wanted to use Natsu’s power to complete her own artificial dragon. Gray was also acting like he was involved in this and that he betrayed Fairy Tail.

First off, if this series expected me to buy the idea of Gray turning traitor, then I’m a little insulted. If that had been true, it would mean flushing seventy episodes down the drain.  Of course, Grey had a reason. Too bad his reason was dumb and not well thought out. Which is what I can say about this arc.

This storyline felt like a step backward. Had this taken place before the Nirvana Arc, fine. Having it after ignored all the progress made.

Daphne’s plan shouldn’t have been that hard to stop. It shouldn't have required the whole of the Fairy Tail to stop her. Among them being a well-rested, combat-ready Erza. Daphne wasn’t a threat. But yet she was. Why?

If I had to bet on it, more throwaway arcs are coming. It would be amazing if this were the only one. I doubt it. 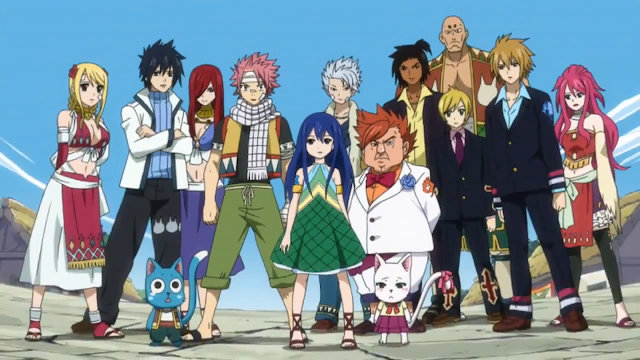 There were a few hints throughout this season that I want to see explored more. When they appeared here, they were intriguing on one end and downright adorable on the other.

Going forward, it would be nice if this series started correcting its pacing. That’s still the biggest thing against Fairy Tail. Fortunately, this is not holding it back.

Sure, this season wasn’t as good as the first, yet this remains a good show. This wasn’t bad by any means. Parts of it were stupid, but if that’s all I need to pay, thats's okay by me.