***Warning, the following may contain spoilers for Kobayashi-san Chi no Maid Dragon. Reader discretion is advised.*** 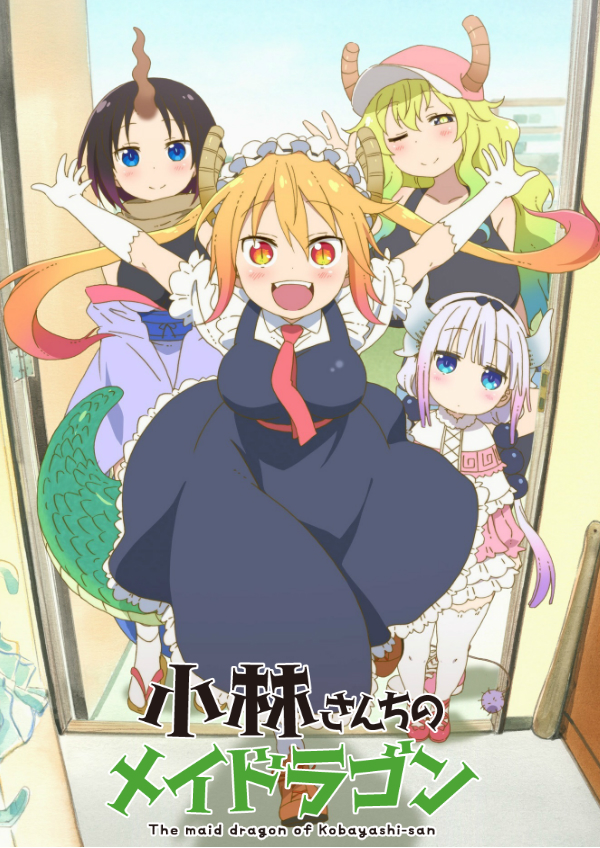 For Kobayashi (voiced by Mutsumi Tamura) things were as normal they could be. Opening the door one day, though, caused her average life to chang forever.

There stood a massive dragon. Stricken with understandable fear, Kobayashi can only watch in awe. She grew more dumbfounded when the beast transformed into a human girl. With a smile, the dragon introduced herself as Tohru (voiced by Yuki Kuwahara).

As it turns out, while drunk, Kobayashi invited Tohru to come live with her. At first apprehensive, Kobayashi stayed true to her word. From then on, Tohru became Kobayashi’s personal maid.

And where there’s one dragon, there’s sure to be more. Tohru gets discovered by her close friend. A young dragon named Kanna (voiced by Maria Naganawa). For Kobayashi, peace of mind seems like a long time ago.

While it may not be the most conventional, these three soon grow into a close family. That isn’t to say things are easy. Far from it. Kobayashi must teach these all-powerful dragons the ways of the human world. Or at the very least, prevent them from blowing it up.

I liked this one quite a bit.

Going into Kobayashi-san Chi no Maid Dragon I was expecting to get a kick out of it. It seemed like the right mix of weird and interesting to hold my attention. But I didn’t think I'd enjoy it as much as I did.

The art style was the first thing to grab my eye. Something about it was pleasing. The more hand drawn look was a nice touch. It doesn’t matter if it was actually done by computers or not. It’s a treat to watch animation which looks done by hand.

Along with that, it felt familiar. Like I had seen it somewhere before. This feeling continued to grow and grow. To the point where I realized, “No wait, I know I’ve seen this somewhere before.” And I had.

Kobayashi-san is from the same creator of Danna ga Nani o Itteiru ka Wakaranai Ken. Another series I a lot of fun with. As Kobayashi-san continued, many of the other qualities of Danna ga came through. Strong jokes. A more grown-up setting. And a focus oon dealing with less than average situations.

This was a funny series. While there was plenty of slapstick and physical comedy, there was more to it than that. Dialogue, banter, and reactional humor played a big role. Together they were why Kobayashi-san was as hilarious as it was. 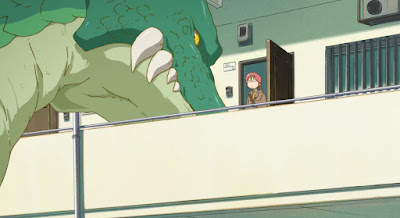 Also like Danna ga, Kobayashi-san was more adult oriented. And I don’t mean the sexual way. Although this show wasn’t void of that. Our leads were adults. It was good to get out of highs school. It was a much-needed breath of fresh air. Besides, younger leads would’ve been a hindrance. There was more freedom. What the show wanted to do could only have worked with adult characters. 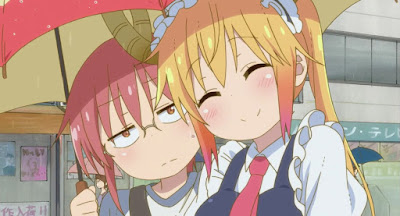 Then there's the idea of the show itself. The part I thought was the cleverest wasn’t in the premise. How it all started. There was no grand explanation. No convoluted reasoning. No deep meaning. Kobayashi got drunk one night and made a promise to a mythical dragon. Done. 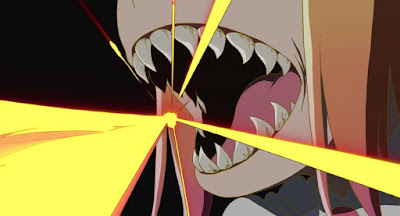 From that simplicity grew a show with so much flexibility. It could do so many things and whatever it wanted because it wasn’t tied down to all that much. The catalysis of that was something shared between both Kobayashi-san and Danna ga. 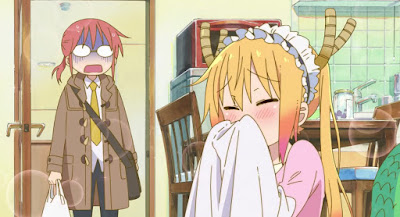 The characters were the heart and soul of this series. And I’m not only talking about Kobayashi, Tohru, and Kanna. I’m referring to all the characters. Each one added something. Making the show all the more memorable. But to keep focus, we’ll only look at our main three. 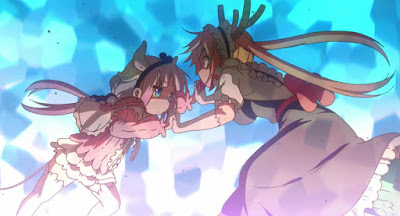 Kobayashi was an ideal straight man. Though astonished and terrified of the power of dragons, she was quick to adapt. Her level of understanding and tolerance was almost inhuman. But for the purposes of the show, she was perfect. Yet what made her stand out, even more, was her progression.

Despite how silly this series got, there was a fantastic character arc to Kobayashi.

Kobayashi started your average business woman. She was a hard worker and work was her life. She was accustomed to her single lifestyle.

By the end, she pulled a full one-eighty. Kobayashi was the anchor to this unexpected family. Her and Tohru’s friendship was air tight. They knew they could rely on each other. They made a great pair. 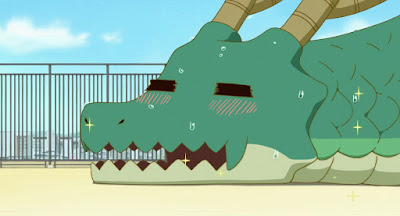 Yet it was Kobayashi’s relationship with Kanna which was the most poignant. No ifs, and's, or buts about it. Kobayashi became a mother figure to Kanna. And like everything else, she grew to the role well. 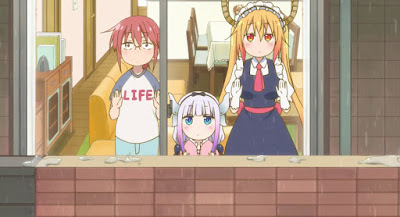 Tohru was great because of what she was a mix of. On one hand, she was cute. I’m not going to say she wasn’t. But it was that cuteness which subdued, or at other times enhanced her destructive power. The show never downplayed it. Tohru could’ve destroyed the world if she chose to.

This was just the side we saw of her. Being the mystical being she was, Tohru had lived a long life. 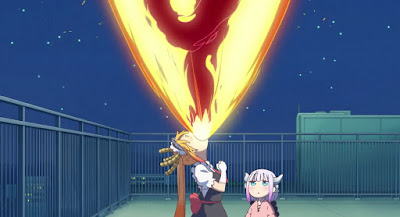 Throughout the series, there were hints which showed it wasn’t always the easiest of lives either. It made sense why she would have an innate distrust of humans. Kobayashi broke that barrier.

Tohru wanted nothing more than to be with Kobayashi. She had to put aside her old ways of thinking. Before, that was something she wouldn’t have ever consider. Yet for the first time, things were different. For Tohru, she had found the place she could be happy. She found where she belonged.

Finally, with Kanna, there’s something you need to always remember. And it was something the show did a good job at illustrating. She may have been a dragon, but she was still only a kid. There was never any mistaking Kanna’s age.

She kind of reminded me of Renge from Non Non Biyori. Except if, you know, Renge was a dragon. There were a lot of things she didn’t know. Kanna's curiosity allowed her to get used to the human world much faster than Tohru. But it was also why Kanna gravitated to Kobayashi.

Kanna a parent to tell her when she did a good job and teach her things. When Kobayashi filled that role, Kanna held her in as high a regard as Tohru. And Kobayashi’s influence had an effect. For instance, when Tohru’s rival, Elma (voiced by Yuki Takada), needed help, Kanna didn’t shun her. Instead, she offered to help. Much like Kobayashi would’ve done.

This wasn’t done through big events. It wasn’t done by last minute crises. And it certainly wasn’t done because the story simply said so. You could see the changes as they were happening. They were a key part of the series.

This was a level of depth I didn’t think Kobayashi-san would go. Keep in mind, this was still a pretty ridiculous show. It was a comedy first. When there were serious moments, they felt natural. They weren’t forced. That’s a good quality to have. 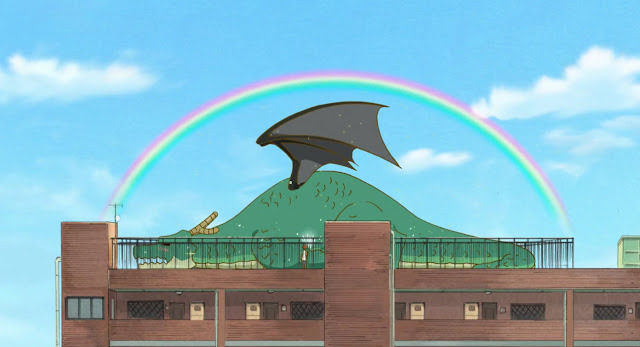 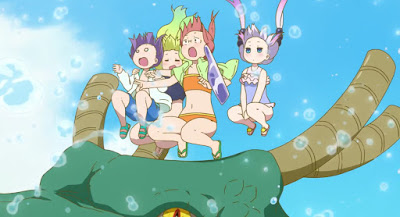 Kobayashi-san did the responsible thing and had an ending. It didn’t set itself up for a second season we don’t know will ever happen. This is something to be admired. A lot of anime don’t do this. It sucks because I want Kobayashi-san to continue. This was too good of a series to end here.

Is that really a negative? Of course not. This was a solid series. But it did end a little too soon. 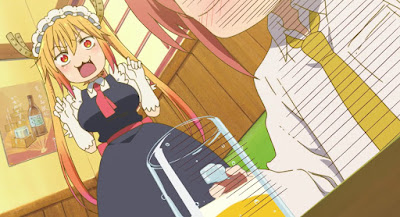 That said, there were aspects where Kobayashi-san didn’t go far enough. More than that, it did a few things which felt wasted in the long run. It could’ve gone intoe more detail. 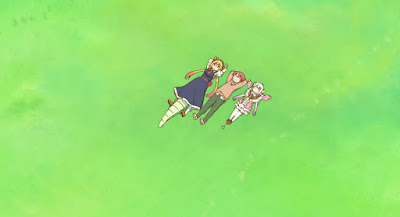 The biggest one was with the world Tohru and Kanna came from. The world of magic and dragons. It would’ve been nice to learn more about it. I mention this because there was enough to say knowing more wouldn’t have been insignificant.

The existence of the other world was underplayed. And it's the kind of thing where if you start thinking about it, more questions than answers come about.

What was the other world? What kind of species and races existed there? How is it possible for some species to travel to our world? Sure, the answer to many of those questions could be magic. But then why have two separate worlds? Why not have dragons and humans exist in the same world? This show’s already ridiculous enough. The other world added a layer of complexity which wasn’t fleshed out. I want to know more about Tohru’s past. I want to understand why Kanna needed someone to look up to. While we’re at it, why don’t we learn more about Kobayashi?

This is what I meant when I said the show ended a little too soon. There's more that can be done. So if a season two does get greenlit, there's more than enough material. 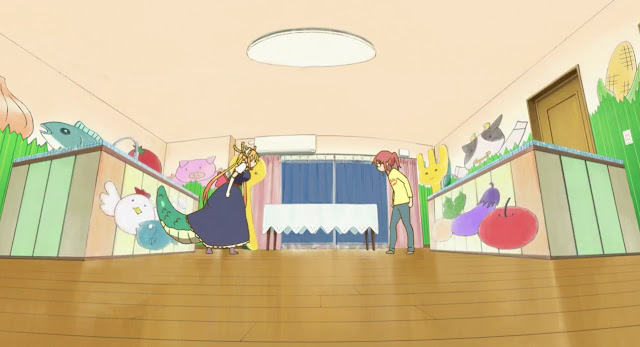 When you expect one and then get something better.

Kobayashi-san Chi no Maid Dragon was a great time. Along with it being hilarious, it was something a little fresh. Though it could get crazy and over the top, it never crossed a line. It became something that was its own. To help with that where strong characters with tangible growth as people. A detail which didn’t need to happen, but happened anyway.

I hope one day to get the chance to return to this series. Until then, Kobayashi-san is worth checking out.