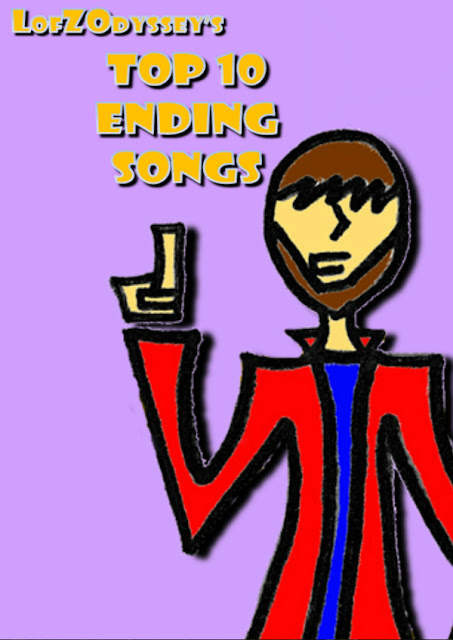 If there’s something easier to skip than a show’s opening song, it would be its ending song.

With cliffhangers, enthrallment, and general curiosity plaguing most audiences, who can sit through the entire ending credits before playing the next episode? It’s perhaps why series are not often associated with their ending themes.

A common trait I see with opening themes is they often do little to set the mood and sometimes fail to portray what exactly is going to happen. Ending themes do this too, but are usually much worse. I can’t even begin to tell you how times an episode has ended on a dark, serious note, where many people have dead, the s@#$ has hit the fan, and then suddenly a light hearted, happy go lucky song that could be found in some random children’s show starts playing; like yeah, that’s not tension killing what so ever.

However, there are occasions where one comes along that stops you dead in your tracks. Whether it’s the tone, atmosphere, or sheer epicness, sometimes an ending song takes you completely off guard.

An ending theme has never swayed my opinion of a show, either positively or negatively. But when a good one does come along, its always appreciated.

To that end, here’s what I'm looking for in a good ending theme.
With that out of the way, here are my Top 10 Ending Themes in Anime. 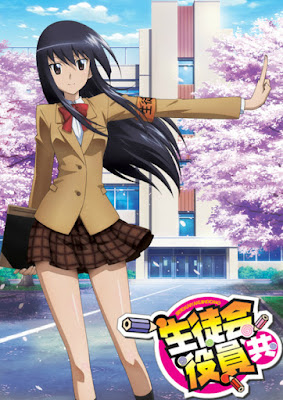 It seems that no matter what I do, this series follows me. That’s fine by since this is one of my all-time favorites; I'll take every chance I can to talk about it.

This is the perfect song to pair with the brand of comedy that is Seitokai Yakunidomo. It’s fast, upbeat, and it does a great job of illustrating how crazy this humor is.

Besides the overall beat, the main reasons I like this song is because of its energy level. An odd thing to like since Seitokai Yakunidomo thrives at a much more down to earth pace, which is not what's going on here.

While this isn’t the type of series to use cliffhangers, it's still one that can easily be powered through in a single sitting. This song makes doing so just a little bit longer. 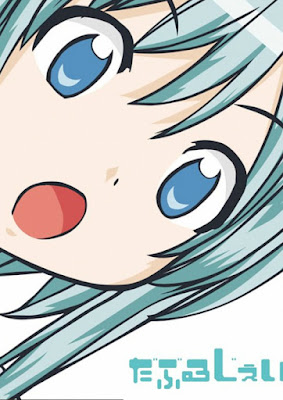 For how incredibly short and, frankly, underwhelming this show is, this ending song's a lot of fun.

Double J relies on dead pan and less on slapstick. You can see it in the animation itself since motion wasn't the kind of thing the series was going for. Then this ending hits and suddenly there's more going on than the rest of the series combined. Though jarring, if you’re anything like me you were instantly hooked.

With short form anime, I noticed that their ending songs have a lot of effort put into to them; often overshadowing the actual show itself. This is what's happening in Double J, for this is a song that will get stuck in your head. 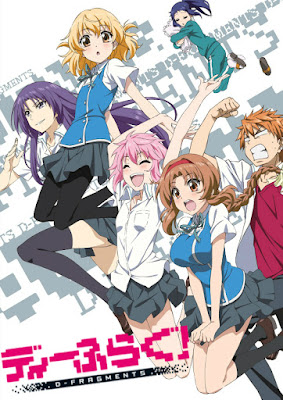 What I like most about this ending theme is that it completely captures what D-Frag was trying to do.

This is a show that wanted to be a lot of fun and do whatever it wanted to do. It didn't take itself seriously, there weren’t any huge problems that had to be addressed, and everything was meant to be a mostly over the top and exaggerated slice of life comedy.

While D-Frag did succeed in some extent, it also had a tendency to overreach. However, this ending song indicates, to me at least, what the point of the series was truly meant to be.

Then you have that rhythm it gets into and I dare you to sit there and tell me you wouldn't be bobbing your head to it. 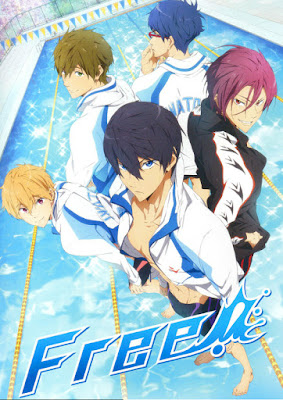 If there’s one entry on this list that feels more like a music video, it would be this one. Weather that’s a good or bad I’ll let you decide, but regardless what’s there not to like about this one.

A catchy tune, a dance club beat, and if you’re actually watching the thing, plenty of eye candy. I mean it’s simply is the perfect package.

Now that I think about it, this ending theme would have maybe been a better fit for Free’s second season, Endless Summer; something about this song gives off a warmer and more fun vibe.

I'd be lying if I said I was wasn’t a little disappointed with Endless Summer’s actual ending theme, since it had to follow up this one. 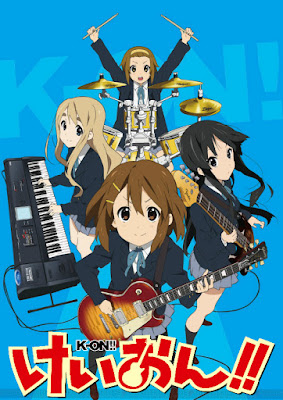 Is it that hard to think that a series about a high school band would make this list?

What’s interesting about this ending is that whenever I think about it, I always imagine that this would be a single that After School Tea would go on to record much further in their career.

Don't Say Lazy just sounds a lot more mature than anything the band plays in the show. There are no images of cute things going on in this one; then again that might not be true based on what you consider cute.

While I like many of the songs that are in K-On, this is the one that will trigger my recollection of this series. A lot of that might have to do with the fact that it's been on my personal writing playlist for some time now. 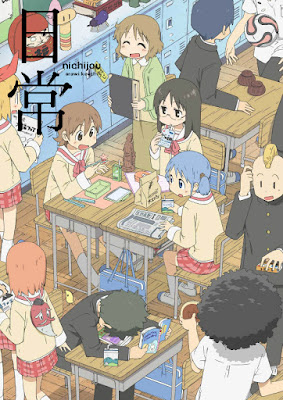 With how off the wall insane Nichijou is and for absolutely crazy and hilarious this show can get, this ending song is nothing like that. Perhaps its why I like it so much.

The overall tune is calm and relaxing. Every time I hear it, it puts me in a comforting and carefree mood. This song sounds like it could work extremely well as a lullaby. Now have written that previous sentence out, the name of this song certainly makes a lot more sense.

What this ending theme provides is a momentary breather between episodes, before being thrown right back in to whatever it is Nichijou can come up with. It’s a shame really that that this song doesn’t last until the end of the series. 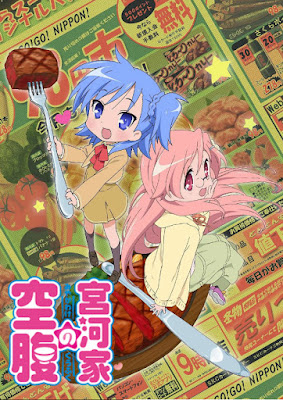 Do you know how hard it is to write a quick little blurb about a piece of music that doesn’t even last a minute in some cases without sounding repetitive as f@#$? It’s very difficult let me tell you.

However, the same cannot be said for Makegumi from Miyakawa-ke no Kuufuku, a spin off series to Lucky Star. This show found a way to makes it’s ending theme an actually part of the series.

We don’t get to hear the entire thing until about episode five. Because of some in show issues, usually involving the lack of an animation budget, only a little bit more of the song is given to us per episode.

This made it all the more fun to see what was coming next. That and it sounds good. 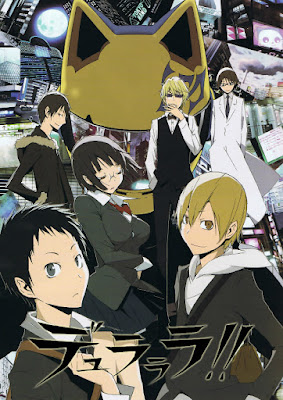 This series has some great music, I tell you what. I’ve already given Durarara the number one spot on my Top Ten Openings list. Now to have it here...whoever put together this series’ soundtrack should be given a raise.

This song is another one I turn to at karaoke whenever I feel the need to give a Japanese track a try; and like always it’s a miserable failure, but I have fun anyway.

The thing this ending theme does best is that it manages to capture the long tangled web that is Durarara. Plus this is a fun song to simply zone out to.

In case anyone is wondering, I will be looking at the second season of Durarara eventually; there’s a few things I need to get done first before tackling that beast. 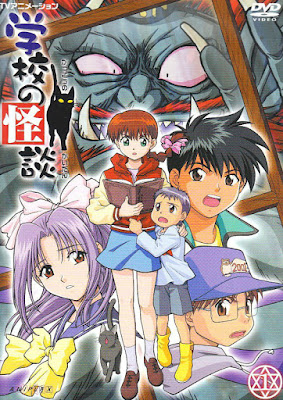 The first time I hear this song, literally within the very first few seconds, I knew that it was going to make this list and that it would be fighting for one of the top spots.

It doesn’t matter if it’s the Japanese or English version, Sexy, Sexy lives on. While I’ll admit that it does feel more at home with the comedic dubbing, this ending works surprising well with the much darker original.

Something about Ghost Stories is inherently fun, weather you want to get a scare or a laugh. Thus it’s even more amazing that this ending theme that can complement both. It really is one of the best.

I say that, but it was obvious to me that there could only be one song capable of filling the top spot. 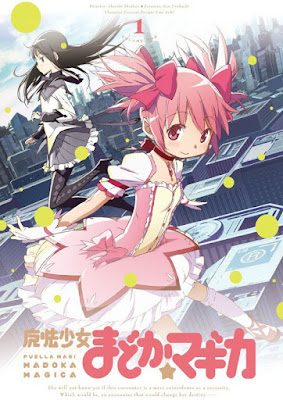 Up until this point, there's been a common theme amongst all these entries. They’ve all come from shows that mostly stay on the more positive side of things; yes even the creepier version of Ghost Stories doesn’t get too out of hand.

Maho Shojo Madoka Magika isn’t like those other shows; in fact there are few that are. Once this series goes dark, it doesn’t come back. All the grimness, sadness, and tragedy that make this series the marvel that it is can be heard in this ending song.

I absolutely love this one, so it made all the sense in the world to put right here at the top (or bottom since you've been reading down).

Magia from Madoka Magika is my number one ending theme.

Like it was for my Top Ten Openings, there will most assuredly be an update in the future. More shows will get watched, my opinions will change, you name it. There is no way that this will be the same list a year from now.

But that’s where I want you to come in. Do you agree with my list; probably not. If that’s the case let me know. Where did I screw up, what songs should be here that aren't. Let me here your thoughts.

Until next time then.