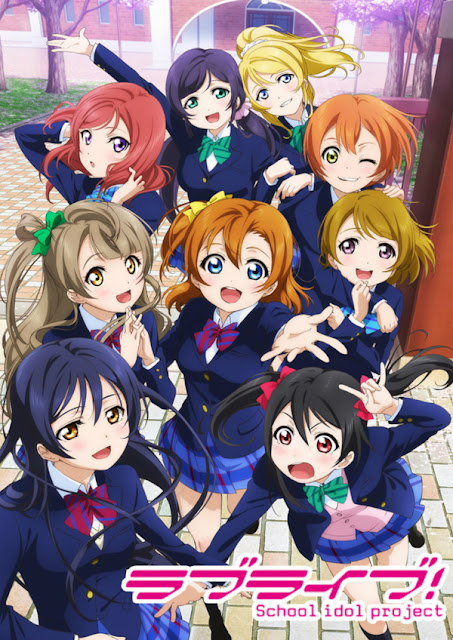 Otonokizaka Academy, a long established high school, is on the verge of shutting its doors for good. The news is devastating for second year Honoka Kosaka (voiced by Emi Nitta). Hoping to garner more students and overturn the decision, she desperately tires everything to save her beloved school.

While visiting a neighbouring academy, Honoka is struck with awe when she hears the school idol group A-Rise. Inspired, she decides to form her own idol group with the help of her two closes friends, Kotori Minami (voiced by Aya Uchida) and Umi Sonoda (voiced by Suzuko Mimori).

Honoka's determination is inspiring and slowly the group starts to gain more members.

From this point on I will be comparing Love Live to K-On a lot. The two shows follow many of the same themes and ideas, but believe when I say these are most definitely two different entities. 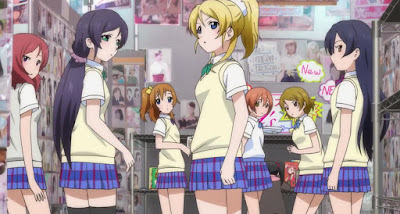 Like K-On’s After School Tea Time, the bond between Love Live’s μ’s is the highlight of the show. One can argue which is stronger, but to me, in order for this series to work, μ's bond needed to be inherently stronger since it must keep together nine rather than five. Had this failed the show would have ended up being forgettable. I had my doubts if it could be done, but Love Live proved me wrong. 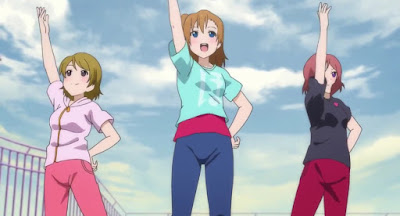 μ's is composed of a rich personality pool that makes the group feel dynamic and alive. While I do prefer the music of K-On, Love Live still manages a respectable sound track. However, the music of the show is by no means the point of the show. 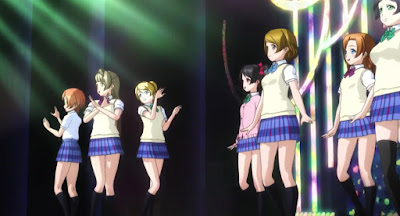 There is strife amongst the girls. They disagree, they argue, they challenge each other. In fact, it gets so bad that the idea of disbanding is not only considered, it damn near almost happens. K-On didn’t even attempt something like that.

It’s clear that becoming the best school idol group is a goal that they all want to achieve, but it’s not the reason they try so hard. Everything they do is due a certain, rather unfortunate realization and the group has to come to terms with said realization.

The final episode hits all the right notes at all the right times. Its effectiveness is strong and it was certainly a bummer to see it all come to a close.

Practice and Build Up

My biggest complaint of K-On was that you never got to see After School Tea Time become a band. For them, everything seemed to fall neatly into place. Love Live doesn’t do this.

From beginning to end, you get to see the growth of μ's and its members. They practice all the time and you witness them slowly getting better. It makes the show all that more enjoyable because there is actual work put into each performance. 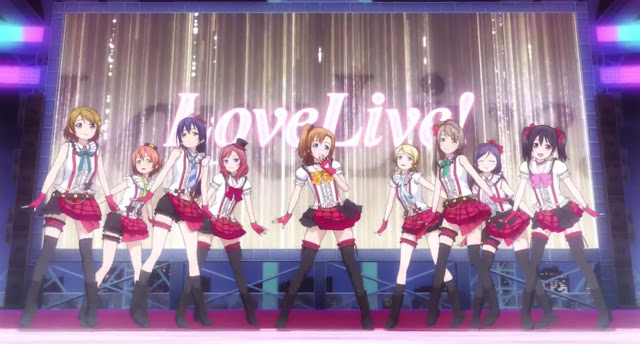 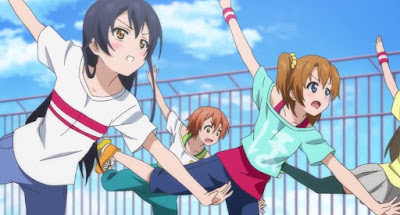 By the end of the first episode, I was confident that there would be a lot of things to like about Love Live. Unfortunately, there were also a lot of things that I thought might become an issue. Sometimes I hate being right. 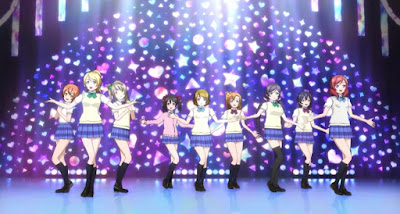 While μ's might be well rounded as a group, the same cannot be said about its members. The show does an amazing job of portraying the girls as the best of friends, but you never get to see them as individuals; well mostly.

Sure the series does a pretty good job at giving character to its three main leads, Honoko, Umi, and Kotori. Plus the show does a decent enough effort with Eli and Nico, but as for the rest, Rin, Maki, Nozomi, and Hanayo, there is much to be desired. 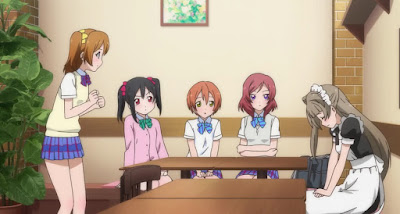 To be fair, the show does try in the second season to fix this. Yet, it doesn't come close to being adequate. At best, Love Live succeeds with giving each girl a character trait, but far short of a real personality. 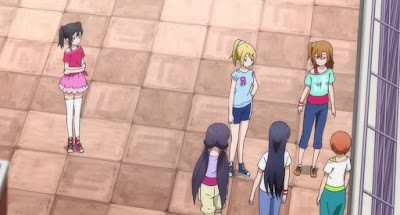 It’s no mystery why either. There are just too many characters that need to be dealt with. The show could have spent the whole first season giving each girl their own episode arc, but then there would have been no time for story. Love Live tried to take on a daunting challenge that it wasn’t prepared to take on.

Little Payoff
Though Love Live does many things that K-On failed at, it does fumble in places K-On excelled in. I love the fact that you get too see μ's grow as a team and that the build-up for each performance is genuine. Therefore, isn’t it weird that I don’t remember any of the concerts in the show?

It happened without fail. I would get really excited for the next live, but they were always so underwhelming. They always felt like music videos rather than an actual performance (the hilariously obvious use of CGI animation didn’t help).

Where K-On had all flare no business, Love Live is all business with no flare. With the sole exception being the very first μ's concert, there is no performance that is noteworthy or memorable. 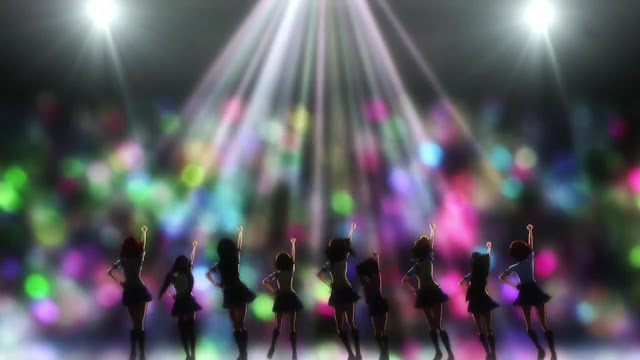 For a two season anime, there are too many missed opportunities. The series is plagued with pacing issue, the story tries to sloppily catch up with itself, and there are a slew of questionable plot devices (Honoka has no business being student body president god damn it). I felt myself getting angry with each stumble. There is so much that this show could have done that it just doesn’t do.

So then why do I like it so much?

Yes, despite all the problems, I honestly felt sad when the final few episodes played. The road getting to the end is bumpy, but it’s always on course and the journey is still a lot of fun. This is a good anime, no doubt in my mind.

If you liked K-On there is no reason why you shouldn’t give Love Live a try.


But these are just my thoughts. What are yours? Have you seen this show? How would you advise Love Live? Leave a comment down below because I would love to hear what you have to say.


Others in the Love Live Series

Posted by LofZOdyssey at 7:19 AM